The global cohort will explore the future of journalism through discussions, seminars and a personal project 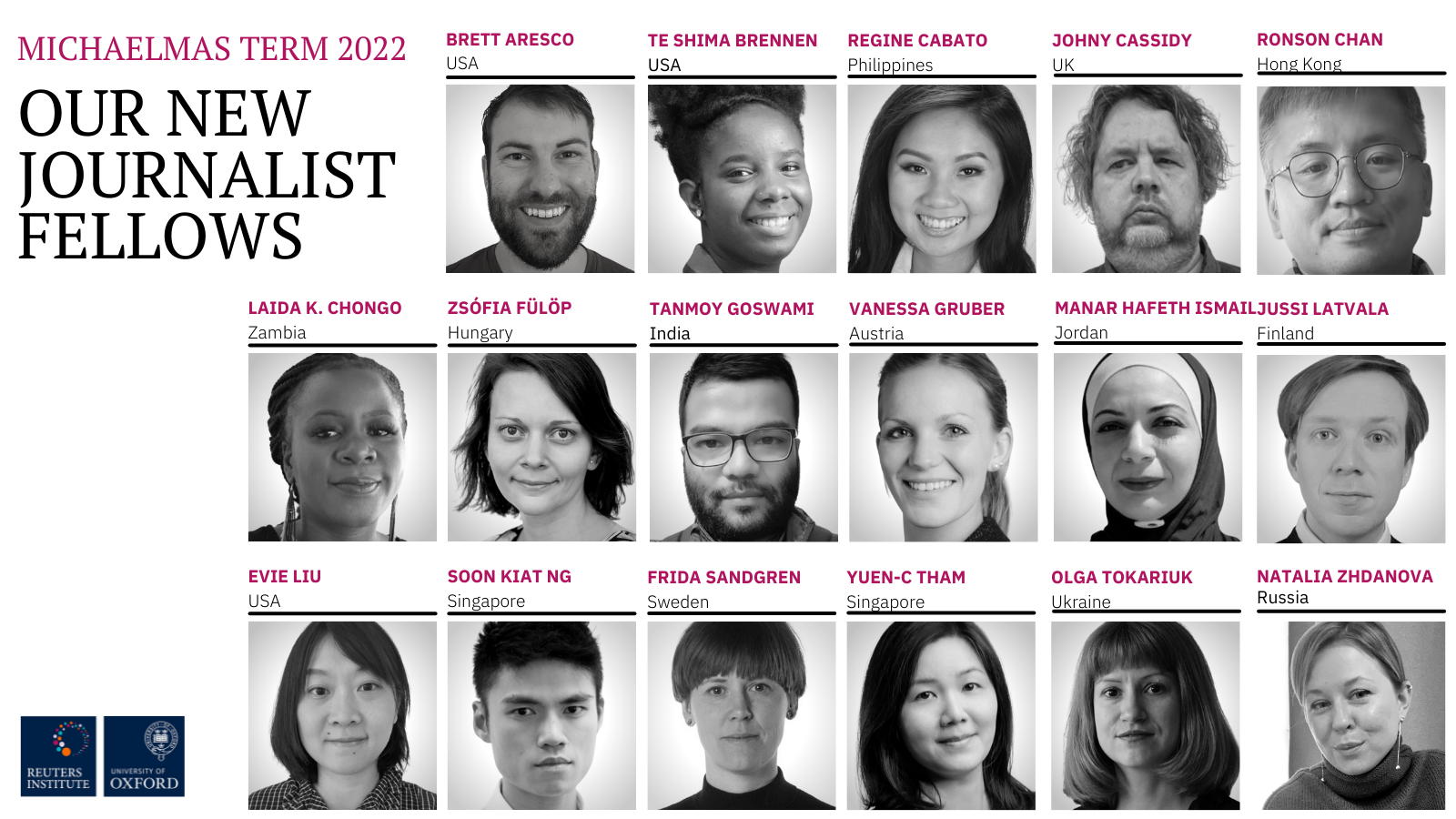 Seventeen journalists from fourteen countries spanning four continents have joined the Reuters Institute to join our Journalist Fellowship Programme this term. The new cohort includes reporters, producers and broadcasters from a range of legacy and independent media outlets. All of them will take part in an engaging programme of activities to allow them to explore the challenges facing journalism right now.

Our new Journalist Fellows will also undertake an in-depth personal project relevant to their professional interests. Projects this term include the media's coverage of transgender and Roma communities, how to optimise science and climate journalism, grappling with disinformation in the Global South, and how journalism should approach questions around the metaverse, mental health and audience accessibility.

Mitali Mukherjee, Director of our Journalist Fellowship Programme, said: "We look forward to hosting our new cohort at the Institute. Our programme has been increasingly and purposefully diverse in nature. At a time where challenges for journalists in many parts of the world have intensified, there will be much to share amongst this community."

Read more about each of them below:

Brett recently graduated with honors from Columbia Journalism School, where he covered everything from the difficulty of securing polling places in New York City during the COVID-19 pandemic to Congress' 12-year battle to pass the Corporate Transparency Act.

Te Shima (they/them) is a documentary filmmaker and journalist in Brooklyn. They cover race, gender, and sexuality. As an emerging documentary filmmaker, they tell nuanced stories about BIPOC, queer and trans people as they navigate institutions not built to support them.

Regine reports about the Philippines for the Washington Post. She has sat in a troll farm, followed drug war killings and, most recently, covered the 2022 presidential election. Her commentary has been featured on BBC, CBS, and CNN among other channels.

Project topic: How Filipino journalists can cover and counter disinformation

Johny has been a BBC journalist for more than 14 years during which time he’s worked across most of the BBC's TV and radio news output. He recently moved into digital news where he is hoping his passion for digital accessibility and inclusion can add value to all our content.

Ronson is the head of the Hong Kong Journalists Association and former deputy editor of Stand News. He now works for Channel C. As a journalist for 18 years, he has worked as an investigative reporter, online news editor, and assignment editor in different media.

Laida Kaoma Chongo is an independent journalist based in Zambia with a passion for issues around gender. She is a firm believer that well-informed writing can change Zambia’s journalism narrative for the better and that writing is a powerful tool for advocacy.

Zsófia is a Hungarian journalist for the independent political-cultural weekly Magyar Narancs. She has mainly covered health care, social issues and has done a lot of reporting on underrepresented communities such as Roma, refugees or LGBTQ+ people.

Project topic: How the media represents Roma people in Hungary

Vanessa works as a TV journalist at the Austrian Broadcasting Corporation in Vienna, with an emphasis on the economy and ecology. She grew up in Salzburg and studied Transcultural Communications, Digital Media and Journalism in Vienna and Madrid.

Manar has been working in journalism for nearly a decade, contributing to several news websites and radio stations. She is an investigative journalist and is interested in human rights issues.

Jussi is a Finnish journalist and producer working for the Finnish public broadcasting company, Yle. He is interested in how journalistic principles could be made more visible to our audiences.

Project topic: Journalistic principles and how they could be communicated to audiences, especially online and on social media

Ng Soon Kiat is an associate digital content editor at Lianhe Zaobao. He helps to drive and oversee video content, multimedia features and data-driven stories at the Chinese-language title.

Frida Sandgren is a Swedish journalist and news editor at the national daily newspaper Dagens Nyheter in Stockholm. In her current position on the national news desk, she covers different areas from gang violence and healthcare to education and immigration.

Project topic: How and when science journalism becomes breaking news

Yuen-C is a journalist with The Straits Times in Singapore, currently writing about local politics and working on multimedia content. She has also covered stories on a wide range of subjects from crime and court cases to technology and the COVID-19 pandemic.

Project topic: The opportunities and challenges of the metaverse for news organisations

Olga Tokariuk is an independent journalist and non-resident fellow at CEPA (Center for European Policy Analysis). Olga has vast experience working with Ukrainian and international media. Her reports have been featured at TIME, The Washington Post, NPR (USA), Monocle (UK), and EFE (Spain).

Project topic: Disinformation and the impact on democratic societies

Natalia has been covering key socio-political events for top-tier independent media (across online, radio, podcasts and YouTube) for more than 10 years. In 2020, together with a well-known Novaya Gazeta investigative journalist Pavel Kanygin she founded and successfully developed a political YouTube show, 'To be continued'/'Продолжение следует'.