As the world focuses on Ukraine, Iran is on the verge of becoming an internet black hole 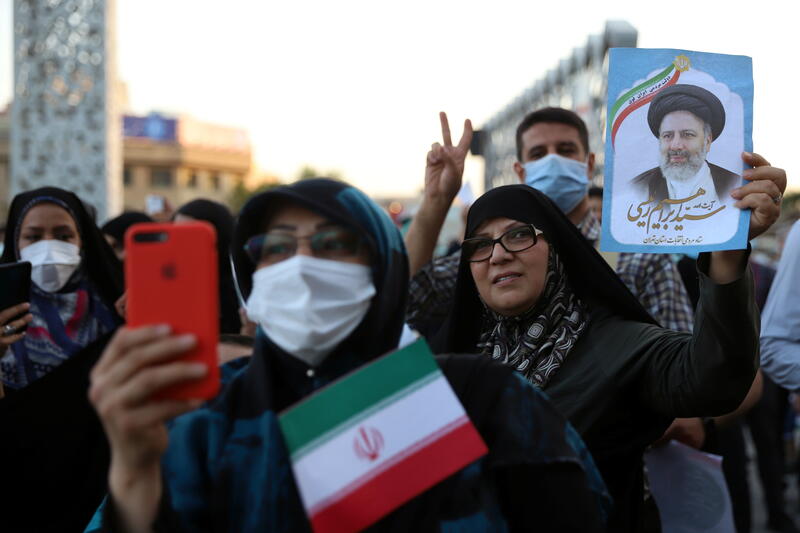 A supporter of Ebrahim Raisi holds ups his portrait during a celebratory rally for his victory in Iran's presidential election. Majid Asgaripour/WANA via REUTERS

Hossein Ronaghi, an Iranian blogger and activist, disappeared on 23 February. A day before, he had tweeted against Iran's internet protection bill, which is now being deliberated in parliament. The bill grants authorities powers to surveil online activities of citizens in what already is one of the most restrictive internet environments worldwide. Two days after his disappearance, Ronaghi contacted his family from a Tehran prison to say he was going on a hunger strike to protest against his imprisonment and against the new law.

This kind of opposition has not stopped Iran from moving ahead with a project that would stifle any remaining internet freedoms in the country. Social media platforms are already blocked in Iran. So people rely on VPNs to access services like Telegram, Twitter, YouTube and Facebook. The new law also criminalises the production, sale and distribution of VPNs, in a move that will cut off Iranians from the global internet.

Film and music are tightly controlled by the authorities and require official approval and television is entirely controlled by the state-owned broadcaster. The proposed law is an attempt to further control the only remaining avenue for expression. According to UN human rights experts. It will force technology companies to "follow state guidelines" or be subject to bandwidth throttling and blocking.

Around 58 million of the 82 million Iranians use the internet every day. But there is not a single country with least internet freedoms among the 70 countries surveyed for the latest Freedom on the Net report. Even war-ridden Syria fares better than Iran. If the control over the net is already so tight, what has made the regime go even further?

“From the perspective of a sanctioned country that is threatened by regime change on a daily basis, empty as these threats may be, it may make sense to securitise the internet,” says Dr. Arshin Adib-Moghaddam, a professor at the School of Oriental and African Studies of the Unversity of London  and the author of the book What is Iran? Domestic Politics and International Relations in Five Musical Pieces.

Subject to both international sanctions for years, the Iranian regime has been on a mission to build its own internet to circumvent the vulnerabilities of operating on an internet controlled by companies from hostile countries. The bill now going through parliament takes things a step closer towards this goal.

In the first decade of the 21th century, Iranians started using the internet to protest against authorities. In the late 1990s and the early 2000s, there was a substantial amount of free expression online, according to The Iran Primer, a project of the United States Institute of Peace. This period came to be known as “blogistan”, as the discourse on blogs seemed to be happening in a separate, much freer country.

"The idea of building an Iran-only internet dates back to 2005, with the launch of a pilot program connecting the networks of thousands of public schools and the offices of the Ministry of Education. The government allocated $1 billion for infrastructure development related to the project, then called the 'National Internet,'” said Dr. Emily Blout, author of the upcoming book Media and Power in Modern Iran: Mass Communication, Ideology, and the State.

What accelerated the project was the Presidential election of 2009, in which hard-liner Mahmoud Ahmadinejad was declared the winner. Spurred by online posts, thousands of protesters took to the streets to protest voting fraid and demanded Ahmadinejad’s removal from power. The Iranian government reacted by repressing the protests and shutting down the internet. Iran’s Supreme Leader Ayatollah Ali Khamenei even created and chaired a Supreme Council of Cyberspace to supervise online activities in the country

The regime soon realised that a complete shutdown would severely impact the country’s economy. Iran needed a separate internet which could function even when international access was cut off. That’s how they created the concept of a National Information Network (NIN). The bill now going through parliament is part of a campaign to create this national network. “It is part and parcel with a longer-term strategy of forced migration, where Iranian businesses and users are pushed, by mandate and incentives, to operate entirely within the bounds of the Iranian net,” Blout says.

The reasons behind the move

Ironically, introducing this national internet may result in the government stopping internet censorship. The NIN is known in Iran as the internet-e Paak or the “pure internet”. There will be no need to censor an internet that is “free from immoral, corrupt, and violent content on the Internet”, according to the regime’s words.

Given the government’s full control over the NIN’s content, censorship and filtering will no longer be necessary, according to a report from the Toronto-based CitizenLab, which does research on information and communication technologies and global security. “The NIN will also be a medium through which the government will propagate the revolutionary Islamic discourse to young people,” the report says.

The obvious casualty of an Iranian national internet is free expression. At least 11 free speech activists are known to be either currently imprisoned or living with an unserved prison sentence hanging over their heads, according to a list compiled by the Centre for Human Rights in Iran.

Meanwhile, the Iranian government claims to not have hindered free speech and it doesn't even admit there have been internet shutdowns in the country.

And yet this is exactly what happened three years ago.

On 15 November 2019, the Iranian regime kicked in new fuel rations, a move that increased the price of fuel by 300%. Almost immediately, protests broke out and spread to 21 cities, as videos of the protest circulated online. The authorities cut off the country’s access to the internet for about a week. As many as 1,500 protesters were eventually killed. “It is important to note that many government officials argue that a shutdown never occurred because of the access to services on the domestic network of the NIN,” said a report published in 2020 by Article 19.

This national internet is the reason why nationwide internet shutdowns have succeeded in suppressing protests and dissent. Iranian human rights activists say the bill now going through parliament makes it difficult and dangerous for people to use foreign email and social media platforms, vital tools for organising protests and reporting human rights violations to the outside world. “The only 'protection' the [new] law offers is to Khameini and to a regime increasingly under threat from its own people,” said Dr Emily Blout.

The cardinal mistake is to assume that the internet can be subdued, said Dr. Adib-Moghaddam. “The highly educated Iranian civil society has demonstrated that they are very well equipped to circumvent governmental restrictions online. The new forms of AI technology in particular go both ways. They can be used by states to suppress dissent, but they can also be used for purposes of resistance against authoritarian laws, as the group “Anonymous” clearly demonstrates,” he said referring to an international Internet collective that gave users special advice on forums and tools to fight the Iranian government's censorship.

Given its strategic location and importance in global trade, experts believe that Iran can’t be turned into a new North Korea. Iran will continue to be seen as a major regional power by virtue of the position, size and historical “soft power” in Asia.

The country was recently admitted as a full member to the Shanghai Cooperation Organisation, an alliance spearheaded by China and Russia. Iran is also playing a major role in China’s Belt and Road Initiative and in Russia’s North-South corridor which is expected to connect Eurasia even tighter. “Iran is incomparable to North Korea both in terms of the state and society. There is in Iran an embattled yet highly sophisticated civil society which represents various political strands. There are also diverse political opinions in the institutions of the state,” said Adib-Moghaddam.

On 3 March, the regime released activist Hossein Ronaghi on bail. The struggle for Iranians like Ronaghi will continue despite censorship and threats.