From press freedom to trust in news and COVID-19 misinformation, our researchers have covered the most pressing issues in the past 12 months 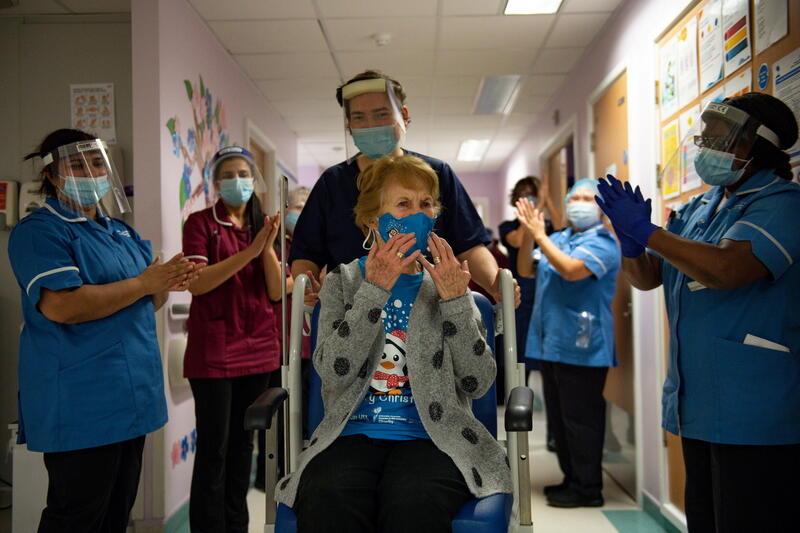 Margaret Keenan, 90, is applauded by staff after becoming the first person in Britain to receive the COVID-19 vaccine. Jacob King/Pool via REUTERS

2020 has been a momentous year for journalism. It has forced reporters to cover a complex, never-ending story, sometimes risking their lives and often under threat. It has brought job losses and accelerated changes across the industry. It has increased concerns about misinformation. In some newsrooms, it has kickstarted a reckoning over race that was long overdue.

The academic researchers of the Reuters Institute have published factsheets, reports and academic articles about many of these changes. As the year draws to a close, here are 20 findings from our research in 2020 that will be still relevant in 2021.

1. News use went up in the countries we surveyed in the first phase of the pandemic

However, while news organisations were the single most widely used source of news and information about coronavirus, many said they did not rely on them. Collectively, other sources were as widely relied on as news, and a significant minority said they had relied on ordinary people like themselves. | Read more

2. News organisations are perceived as more trustworthy than platforms on COVID-19

3. Top-down misinformation about COVID-19 has punched above its weight

Misinformation from politicians, celebrities, and other prominent public figures made up just 20% of the claims in our sample of COVID-19 claims but accounted for 69% of total social media engagement. While the majority of misinformation on social media came from ordinary people, most of these posts seemed to generate far less engagement. | Read more 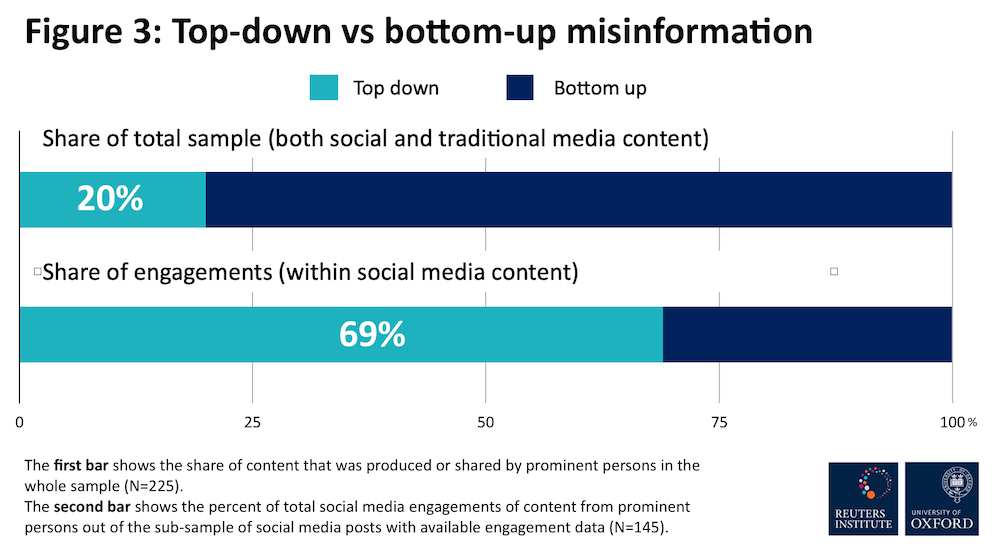 4. Most of the publishers we surveyed expected a substantial fall in revenues in 2020

36% of the news organisations we surveyed said they expected severe drops of 30% and more in their revenue. Only 14% said they expected stable or even growing revenues. If these figures are indicative of the situation in the global news industry, newspapers alone may be looking at a decline of 30 billion dollars in 2020. | Read more

Every market has a majority of men among the top editors, including countries like Brazil and Finland where women outnumber men among working journalists. The percentage of women in top positions varies from market to market. In Japan, none of the major news outlets in our sample have a woman as their top editor. In South Africa, 47% have. | Read more 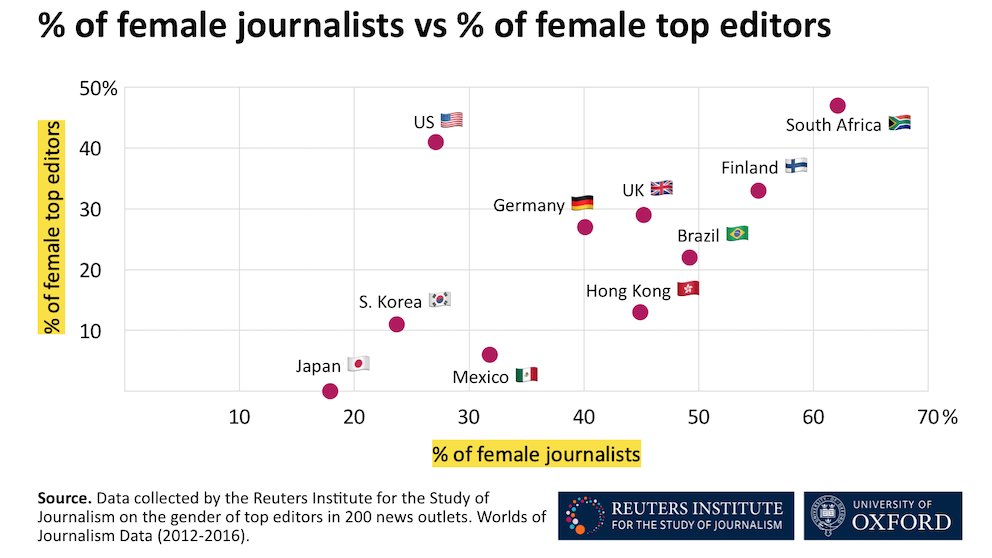 6. Only 18% of the top editors across 100 news brands in five markets are non-white 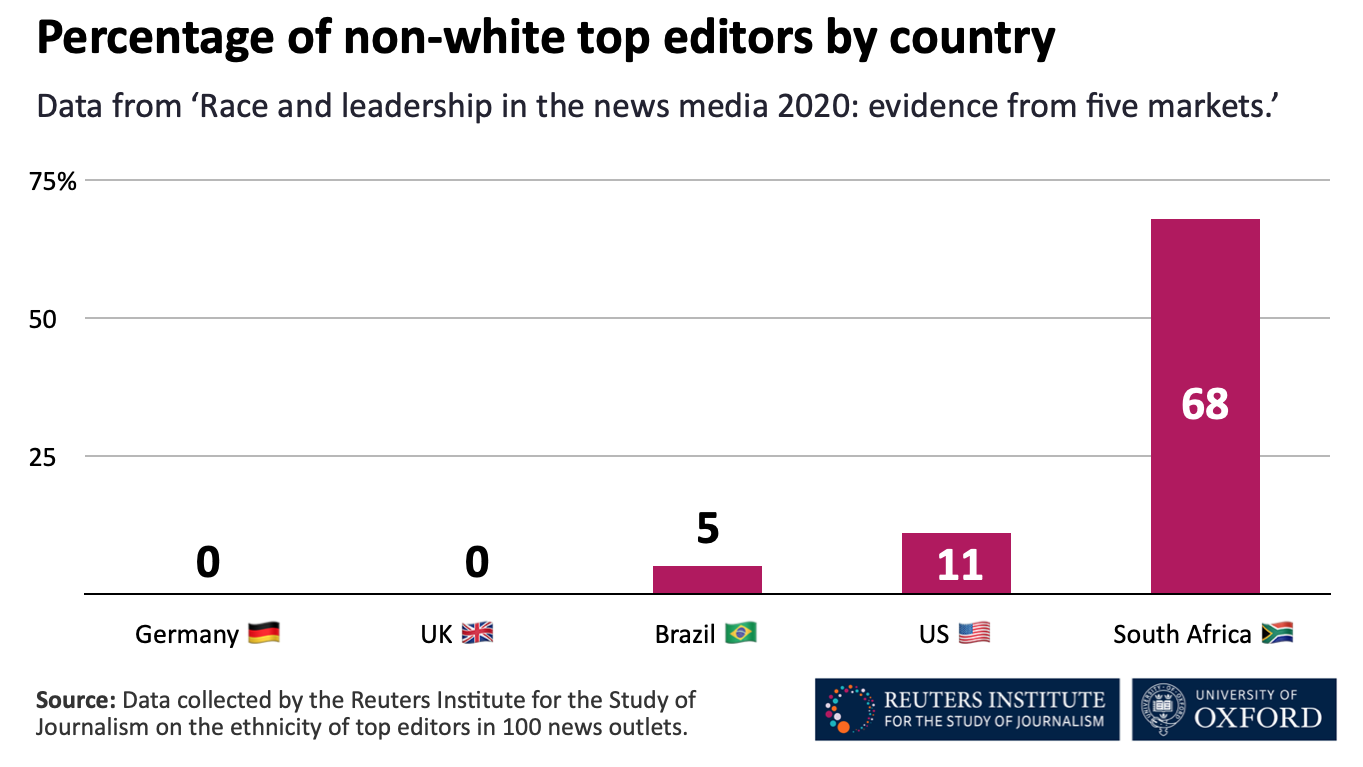 7. News audiences are becoming less fragmented due to mobile access

In the US the increase in mobile internet access has reduced audience fragmentation and increased the amount of overlap between the audiences for different news outlets – even at a time of political polarization. The research was published in the 'Proceedings of the National Academy of Sciences of the United States of America'. | Read more

8. Publishers seem to be making more progress on diversity at junior than at senior levels

Many of the executives we surveyed said their organisation was doing a good job on diversity at junior levels (84%), but only a minority (37%) felt the same was the case at the leadership level. Many news organisations are making progress in terms of tracking data. Ethnic diversity will be their main priority for most in the year ahead. | Read more

9. Visuals in misinformation are more often mislabelled than manipulated

Visuals are often used in misinformation to illustrate and selectively emphasize arguments and claims, purport to present evidence for claims, and impersonate supposedly authoritative sources for claims. In analysis of a sample of COVID-19 related misinformation rated false or misleading by independent professional fact-checkers, we found that most are mislabelled rather than manipulated, and that those who were manipulated were produced using simple tools rather than “deepfakes” produced using AI. The research was published in the International Journal of Press/Politics. | Read more

10. The number of daily news podcasts kept growing in the shadow of COVID-19

Looking across six countries, we have counted 102 daily news podcasts, of which 37 were launched in the last year. They make up less than 1% of all those produced, but account for more than 10% of the overall downloads in the US and 9% in France and Australia. Publishers see them as a crucial way to attract younger audiences. | Read more

11. The number of people vulnerable to misinformation grew substantially in the UK

We defined ‘infodemically vulnerable’ as the section of the population who consume little to no news and information about COVID-19, and say they would not trust it even if they did. According to our surveys, this group grew in the UK from 6% early in April to 15% by late August. | Read more

12. Trust in news keeps falling: only 38% say they trust most news most of the time

This figure from our January survey represents a fall of four points from 2019. Notable changes include a 16-point fall in Hong Kong (30%) following violent street protests and a 15-point fall in Chile (30%), which saw regular demonstrations about societal inequality. In the UK trust fell 12 points (28%), following a divisive election. | Read more

14. Most people want tech companies to block political ads that could be inaccurate

However, across the countries covered by this year's Digital News Report, the survey data show most people (52%) agree that the news media should report statements from politicians prominently rather than not emphasise them (29%) because it would give the politician unwarranted attention. | Read more

15. Most people prefer to get their news from sources with no point of view

60% of the people surveyed across the 40 markets say that they still prefer news that has no particular point of view and that only 28% prefer news that reinforces their views. This preference for neutral news is strongest in countries like Germany, Japan, the UK and Denmark, all countries with well-funded and independent public broadcasters. | Read more

16. Digital-only subscriptions are much most popular than other bundles

Digital-only subscriptions to a single brand are the most common form of access for people who pay for news online in Norway, the US and the UK. Print-digital bundles have proved successful in Norway and paid news aggregators are relatively popular in the US, but they are far less common than subscriptions to single news brands. | Read more

Across six countries we found that people who subscribe to services like Netflix and Spotify are either more likely to currently have a news subscription, or are more willing to pay for online news in the future. This suggests that people are more likely to pay for news if they think other online media should be paid for too. The research was published in the International Journal of Communication. | Read more

18. Interest in local news varies widely by country and federal systems may be the reason

Almost 47% of the people surveyed for this year's Digital News Report said that they were very or extremely interested in local news. If we break this down via market, we observe striking differences, with interest highest in countries with a federal system or a high degree of regional autonomy and lowest in countries with more centralised systems. | Read more

19. Journalists in central and eastern Europe think anti-press rhetoric has grown since 2015

The report we published in January identified six major areas of concern for journalists in the region: anti-journalist rhetoric by politicians and rival media, online and offline attacks, media capture, deteriorating legal environment, concerns over a journalist’s ability to protect sources and lack of collaboration and solidarity. | Read more

20. News audience polarisation is low across much of Europe

Despite fears of heavily polarized patterns of news use, our analysis of 12 countries shows that outside of the US and (to a lesser extent) the UK shows low levels of polarization and high degrees of overlap, and little difference in levels of polarization between offline and online news audiences. The research was published in the 'International Journal of Press/Politics'. | Read more