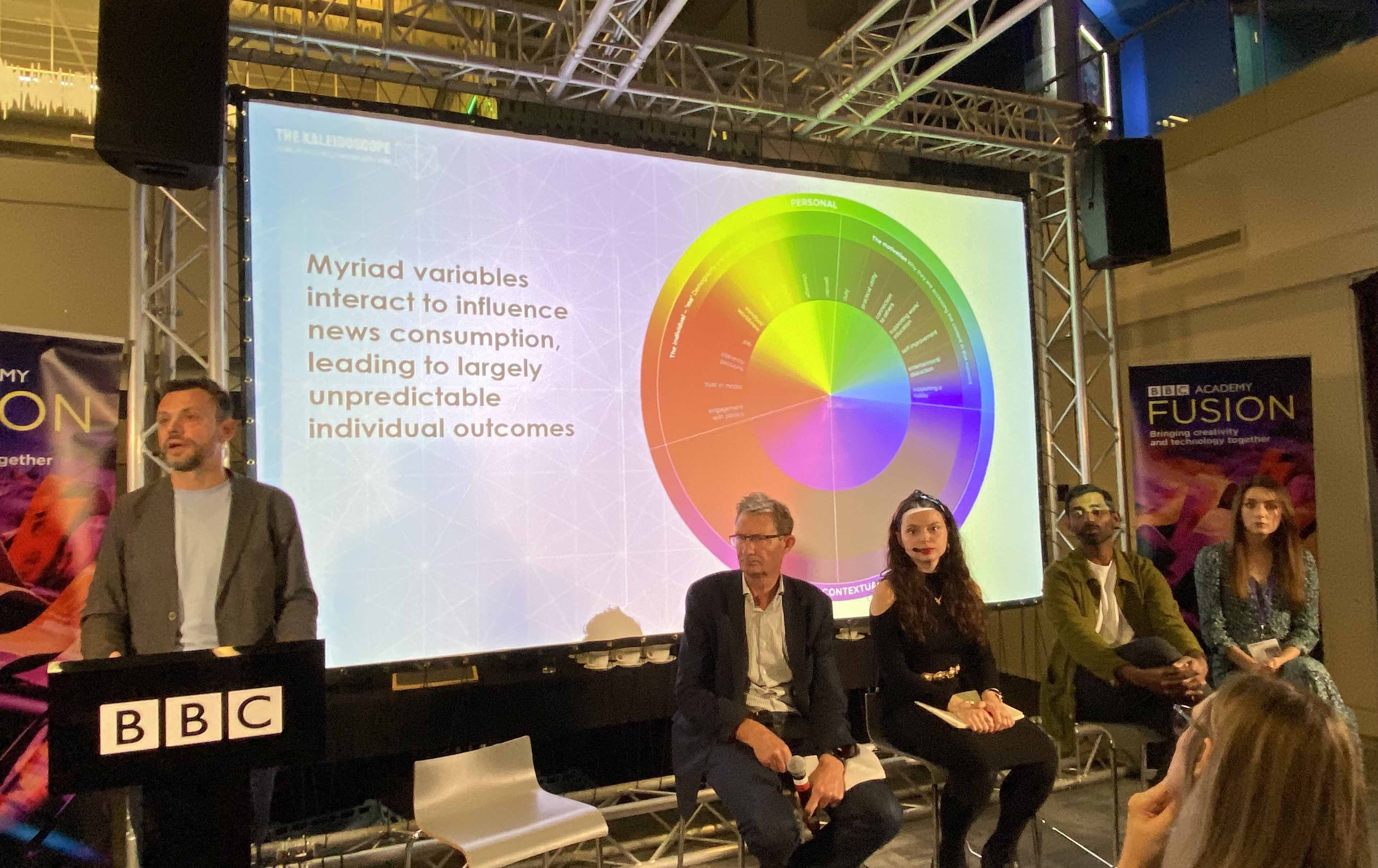 What kinds of formats can news organisations deploy to engage with younger audiences? Is there anything they should do differently to reach this elusive cohort? Those were the questions at the heart of an event that BBC Academy Fusion and the Reuters Institute for the Study of Journalism organised on 27 September.

A short presentation by Craft research agency co-founder Konrad Collao on new research by the Reuters Institute and Craft on young people’s relationships with news kicked off a discussion moderated by our own Nic Newman, featuring leading figures whose focus is reaching young audiences. The speakers were Sophia Smith Galer, senior reporter at Vice News; Valentina Park, Head of Audience at The News Movement; Nadine Forshaw, Head of Social Media Strategy at The Sun; and Kevin Ponniah, Live Editor at BBC News Digital. Here are some of the things we learnt from them.

According to our research, many young people make a distinction between the narrow scope of “the news” (by which they refer to traditional beats like politics and the economy) and the much wider way they define news in general, which includes entertainment, gossip and science. This resonated with Sophia Smith Galer, who said that sometimes, in comments and messages, members of her audience do not identify her or Vice News as part of mainstream media, perhaps due to their use of new formats and less traditional news coverage, whereas she would argue that they are part of the mainstream; Vice News is not a new outlet.

For brands that are firmly part of mainstream media like the BBC, being “the news” can be challenging when it comes to attracting young audiences. However, young people flock to them for big news stories, like Queen Elizabeth II’s death or Russia’s invasion of Ukraine. These occasions present both challenges and opportunities, Kevin Ponniah said, as they strive to present engaging coverage of the event at hand and simultaneously direct the heightened traffic to the rest of their offerings as well.

When actively trying to appeal to young people, news brands often use social media platforms as a way to introduce their journalism to a new audience. Despite almost all news outlets having some social media presence, the extent of their activity on platforms varies a lot from outlet to outlet.

Some have been quick to get on new platforms as soon as they become popular. Vice News, for example, is present and has built communities on YouTube, Instagram and more recently TikTok and Twitch. Its goal is to appeal to ever-younger audiences while maintaining Vice’s original millennial base. “Editorially, it’s not seemed to affect the nature of the stories that we go for, as far as I’ve seen. Ultimately, it's about what's interesting and what's important," Smith Galer said.

Legacy brands approach social media differently. The BBC aims to reach the entire population. But when it comes to young people, more traditional mediums like TV are much less effective. "For us, it's about being where young people are. We want to bring people on site, that’s the pillar of our social strategy, but we need to be where they are," Ponniah explained.

For the BBC, it’s not so much about being the first outlet on a new digital channel and more about making sure that they are adding value to whatever platform they are on. For example, they only appeared on TikTok in early 2022 as a way to report on the war in Ukraine.

"We launched at the start of the war. And the trigger for that was recognising that there was a lot of disinformation out there and we also wanted to reach Russian audiences who might not be able to get that trusted information we felt we could provide elsewhere,” Ponniah explained. “The way that we want to do social platforms is, have a relentless focus and a strategy before we launch, and before we went to TikTok, Instagram was really a key focus," he added.

A tabloid for younger audiences?

The average age of a digital reader at The Sun is around 46 and significantly younger on social media platforms, Nadine Forshaw said. Forshaw and her team use social media to reach young audiences with the purpose of building brand association and loyalty early on. Content is picked out of the digital offerings The Sun already has on its website and only shared on social media if it’s relevant and interesting to that particular audience. Forshaw added that it’s important for The Sun’s social media content to be authentic and a true representation of their overall brand so that their audience knows what they’re getting.

Ponniah agreed with this point. For the BBC, he said, social media is a place to spotlight BBC personalities and BBC faces and add value through trying to do more of what they do best, not pretending to be something they aren’t. He gave a recent example: "Huw Edwards reading the news of the Queen's death performed incredibly well for us on TikTok.”

For a start-up like The News Movement, the formats and platforms chosen have to be intentional in order to do well on social media. “For us, it’s less about age and more about being in the places where news is actively being consumed,” Valentina Park said. These places happen to be on social media and the people there happen to be young, she added. "Not everything is going to resonate everywhere. Something that's really important for us is to have that peer-to-peer, friend-to-friend conversation rather than having somebody talk at you from a TV screen," Park said.

Getting young people to your own platform

“We see our own platform as the best way to fulfil our mission,” Kevin Ponniah from the BBC said. With live blogs, Ponniah’s BBC team is recreating some of the features of a social media platform on the BBC website. Live blogs drive large audiences, especially among people under 34, he said.

“It feels like a natural fit for a mobile-first audience who are used to scrolling, who are used to consuming nuggets of information, multimedia," Ponniah explained. “I think live coverage engages everyone and sometimes it challenges assumptions,” Ponniah. He gave a recent example: the live coverage of the pound’s fall in value scored very well among young people.

A focus on TikTok and vertical video

“It will be a short-format vertical video and high content density. It will often begin with quite a punchy hook. That’s how some of the best ones work. TikTok has been so successful, and all the other social media platforms are turning into a little version of TikTok, that if you do something TikTok-friendly and viral there, it's very likely to do well on the other platforms," Smith Galer said.

Despite social media’s reputation as young people’s turf, it’s not only young people who view news content on social media and it’s not only them who are able to make good social media content. "This stuff is attitudinal. It's not to do with age,” Smith Galer said. “It is a mindset thing and there is a skill to it.” She added that there is some level of training and resourcing necessary to make a great social video. All of the social media platforms also age, Park said: "You have to be open-minded and try new things."

Appealing to young audiences goes beyond just being on social media, it requires innovation and experimentation. Smith Galer explained some of the new approaches she developed both for her personal social media presence and for Vice News, including involving her audience in the entire process of putting together a story. Sometimes, she does this by using social media (and particularly TikTok) as part of her newsgathering by asking for perspectives and inputs from her audience.

Musicians of TikTok…hello 😊 I’d love to interview you for the BBC World Service’s radio programme, The Cultural Frontline. Let me know who you’d like to hear from!

Smith Galer has also explained how her original journalism works and has picked up tips from creators in order to do better on the platforms.

Anyone else care to add any? 😅

By doing so, she is fully embedded in the platform, rather than just coming on to post a finished journalism product. Her TikToks are often designed to accompany the text-based digital articles she writes for the Vice website, with the hope that people interested in the one-minute video will click on the link to read more about it.

Experimentation is crucial in this process. “Journalism has to shapeshift to get to where young people are,” Smith Galer said. “As a journalist, I don’t think that you can step into this industry without wanting to change it or without wanting it to last. For me, there has been an existential need to do all these things.”

This week @nicnewman asked me on a @BBCAcademy/@risj_oxford panel 'how's TikTok changed news?' and - amongst a million thoughts I have on this - it's forced me (and hopefully others) to rethink the importance of participatory social & new formats for journalism's survival. pic.twitter.com/DBYYhiHsDA