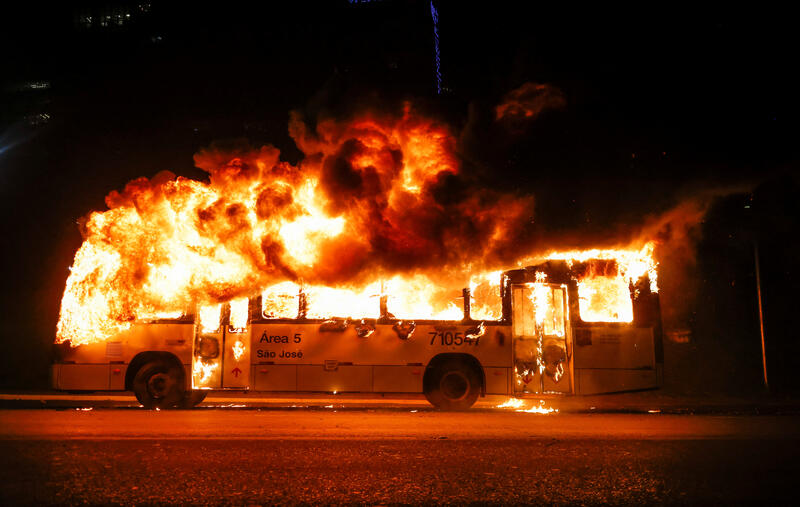 A bus is set on fire in Brasilia after a protest by Jair Bolsonaro's supporters. REUTERS/Adriano Machado

Brazil’s President Jair Bolsonaro has refused to accept the outcome of the latest election, in which he was defeated by left-wing candidate Lula de Silva. It was not a surprising move. In early 2021, Bolsonaro realised he might be defeated and began to spread a series of conspiracy theories against Brazil’s voting system.

Bolsonaro’s move was not original either. He stole this playbook from Donald Trump, who spent his last year in office sowing doubts about the electoral process. If Trump claimed vote by mail was unreliable, Bolsonaro presented electronic voting as vulnerable to fraud.

Once his defeat was confirmed, Bolsonaro went silent, but his most radical followers immediately took to the streets. At first, they blocked hundreds of highways, claiming the election was stolen and asking the armed forces to keep Bolsonaro in power. Days later, thousands set up camps in front of the army headquarters in what many saw as a rehearsal for the tropical version of the assault on the US Capitol on 6 January 2021.

These demonstrations didn’t go away and presented the Brazilian press with a difficult dilemma: should they cover these events? And if so, how? Reporting on conspiracy theories has always been a challenge for journalists and for academics. In this piece, experienced reporters, editors and researchers discuss how journalists should follow these demonstrations that at the time of this writing remain on the streets of Brazil.

How to cover a coup

Experienced in covering armed conflicts around the world, award-winning reporter Yan Boechat closely followed dozens of events promoted by Bolsonaro fans after the elections. The TV station he worked for, Band, chose not to cover the events because they didn’t want to “give voice to the coup discourse". Yan decided to follow anyway as a freelancer.

“I think it's a mistake not to cover it,” he says. “Having tens of thousands of people in front of the army headquarters in the three main Brazilian cities of the country is news. It is news to have thousands of people calling for a coup d'état. In Rio de Janeiro there were at least 10,000 people. The least we should do is to go there and listen to these people. The press makes a huge mistake by ignoring these movements.”

It is not quite accurate to say that the demonstrations are being ignored. Roughly speaking, Brazil's mainstream media monitored the demonstrations from a distance and decided to cover some specific occurrences, such as roadblocks, destruction of property or acts of violence against journalists. A defining characteristic of Bolsonaro's followers, hostility against the press, also played a role in these decisions.

Even teams of journalists from media outlets friendly to Bolsonaro were targets of violence: reporters from Jovem Pan radio on November 15 in Brasilia. A group of protesters didn’t like the fact that a reporter from this outlet said that they were calling for the intervention of the armed forces. Then they surrounded the reporter, began shouting "liar" and forced him to leave the place.

This was one of the days when Folha de S. Paulo, one of Brazil's leading newspapers, decided to cover the demonstrations. Camila Mattoso, Brasilia Bureau Chief for Folha de S. Paulo, says that their coverage of the protests is not part of a predetermined plan and is discussed in the newsroom on a daily basis.

At the beginning, the newspaper thought that the number of people calling for a coup was irrelevant in relation to the total population. "In the light of this, we decided that there would be no need for very close, daily coverage, with reporters in the field. In addition, we have always classified these movements as what they are: coup plotters. We have always treated this as a coup attempt and are always careful not to give it a greater treatment than it deserves," she says.

Jorge Chaloub, a researcher at the Federal University of Rio de Janeiro and an expert on the rise of the far right around the world, thinks it’s essential that the press offers context about the nature of the events. "The US press covered what happened on Capitol Hill very thoroughly,” he says.

Chaloub warns that movements such as those taking place in Brazil shouldn’t be seen as just "another option” available on the table. “It is dangerous that one of the options is the coup option. That shouldn’t be debated publicly. Our current constitutional order was built against everything they stand for. The press must be careful when covering this.”

The price of not covering this

Boechat, the reporter who’s covered the events as a freelancer, considers that journalism has a duty to help society know this phenomenon in depth, with the aim of preventing radical discourse from becoming alluring in the future. "We are not even trying to understand these people. It is fundamental for democracy to understand what is happening. Otherwise, we will get another scare," he says.

Mattoso points out that the coverage of the current demonstrations is similar to the challenge of covering Bolsonaro over the last four years. “Perhaps this will also be a challenge for the next four years. We are talking about a government that has often lied and that has promoted conspiracy theories,” she says. “We're not going to ignore it, but we're not going to stop pointing out the lies. Our newspaper clearly differentiates lies from mistakes.”

The confusion created (often intentionally) between lies and mere journalistic mistakes is addressed by Claire Wardle in The Age of Information Disorder. According to Wardle, academic research already shows that audiences increasingly equate the description “fake news” with poor reporting practices from the professional media. She also addresses the challenge of reporting in this environment.

“We live in an age of information disorder. It is creating new challenges for journalists, researchers and information professionals. To report or not to report? How to word headlines? How to debunk videos and images effectively? How to know when to debunk? How does one measure the tipping point? They are all new challenges that exist today for those working in the information environment. It’s complicated”, she says.

Researcher Chaloub would like the media to be very cautious when transforming a non-debate into a legitimate debate. One of the most cited examples in Brazil was the participation of the army in monitoring the electronic ballot boxes. This never happened before, but was eventually accepted by the Brazilian Justice in an attempt to calm Bolsonaro's rhetoric.

“If you turn some of these things into a debate, you normalise a lot of absurdities,” Chaloub says. “Not everything has two sides. And sometimes the other side is just fascism. For me, the army inspecting ballot boxes is the equivalent of a university taking care of a wounded child. The press should have said that this was not the role of the armed forces.”

Mattoso acknowledges that occasionally Folha de S. Paulo has been forced to play this game. “We try to explain that these theories have no basis and we show that ballot boxes are reliable. But we try not to talk about these issues every day,” she says.

Are journalists amplifying the coup?

Chaloub thinks that journalism played a key role in giving Bolsonaro a stature he never had when he decided to run for president, as he had been an irrelevant congressman. "Journalists should have branded him differently and not as someone in the traditional space of the Brazilian right," he says.

Since Bolsonaro’s rise, there has been a debate on how he should be treated. Unlike foreign news media, the main Brazilian newspapers still avoid framing him as a far-right politician. Chaloub thinks that sectors of the press believed that Bolsonaro would not be elected. Once elected, they believed he would be tutored, which also did not happen. Then, they failed to capture his strength in his campaign for reelection.

Boechat says that good coverage of pro-Bolsonaro movements can help audiences understand the phenomenon and avoid these errors of judgement. He’s been following these right-wing demonstrations since 2015 and he’s noticed two things in the last few years.

“The first was the rise of the faction of those who call for intervention by the army, which was irrelevant and has become the majority. A large portion crossed the border and gave up democracy," he says.

The second thing he’s noticed is that the movement has grown beyond its first constituencies, the impoverished middle class and the rich. "It's still like that, but with a lot more people from the suburbs and black people. It’s also gained a more spontaneous spirit. I met an old lady from the suburbs who took two buses to deliver a packet of sausage to the coup plotters," Boechat says.

When Lula da Silva had his victory certified by the Electoral Court in early December, radical followers of Bolsonaro rehearsed their first version of their assault on the Capitol. Gathered in Brasilia, they attempted to storm the headquarters of the Federal Police, burned cars and buses, and vandalised shops and petrol stations. The press followed the episode, but has yet to decipher the DNA of these movements.

“The Brazilian left tends to believe that fascism is an elite movement,” Boechat says. “However, fascist ideas are becoming popular and the press continues to ignore the organic and popular character of this. It's always tricky to give voice to this, but you can't ignore it. I think there is a lack of reporting to understand who these protesters are.”

More tension is expected in the next few weeks, especially for 1 January, when Lula da Silva is expected to take office in the presence of more than 20 heads of state. As Brazil opens a new page in its history, the eyes of the world will be on Brazilian democracy – and on its journalism too. 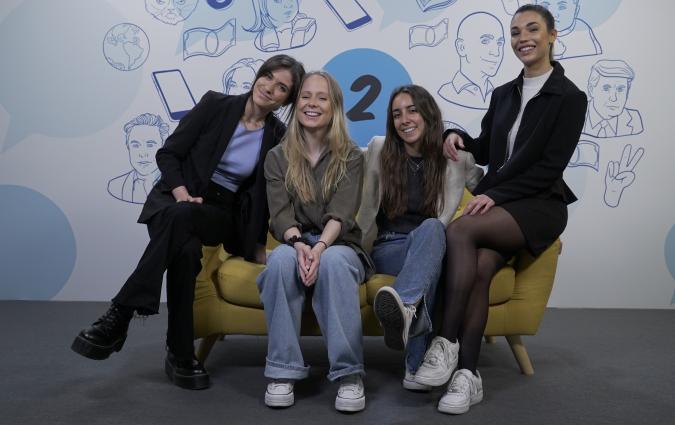