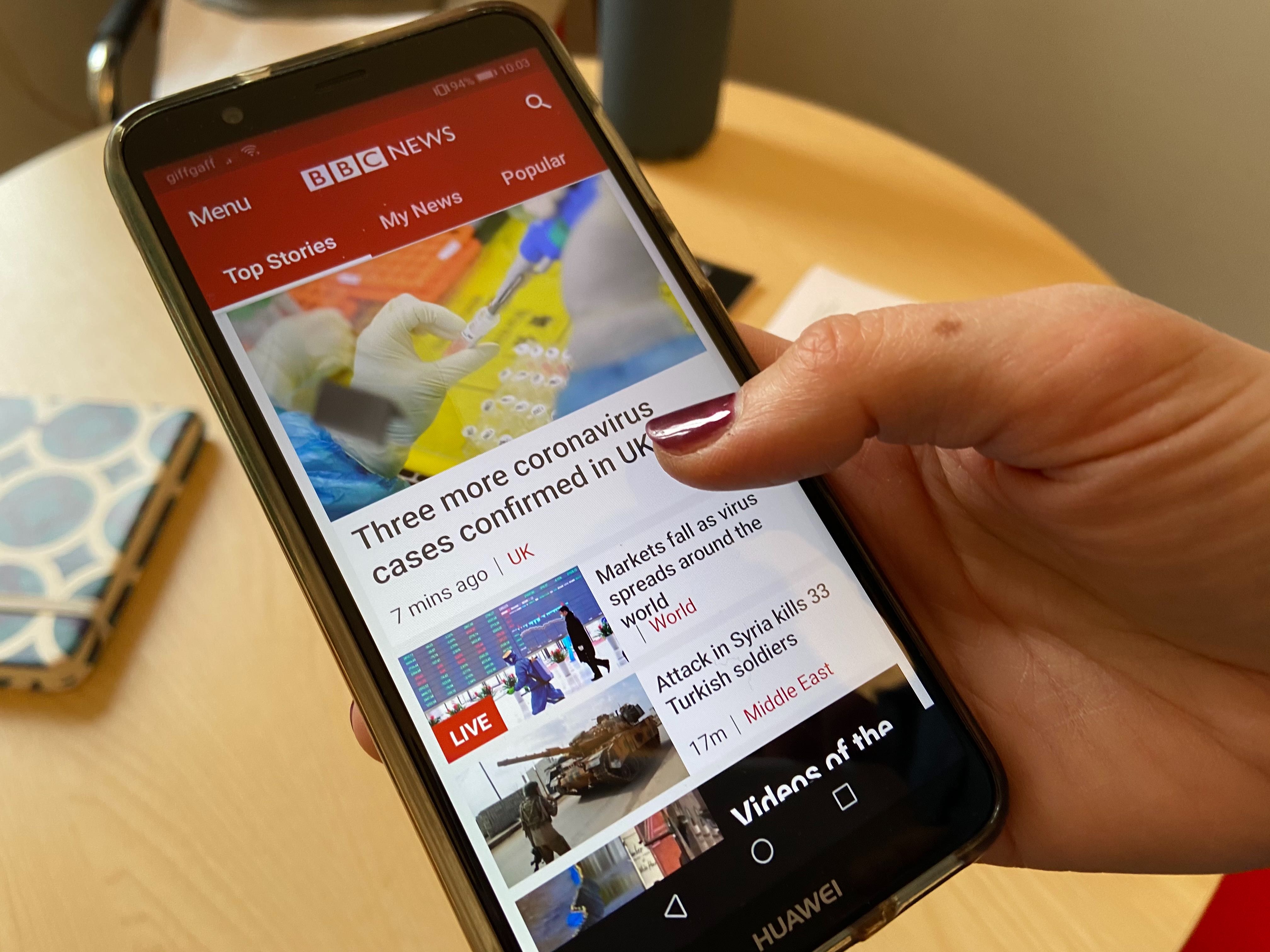 The challenges facing the BBC and its next Director General include:

In this piece, we summarize key findings from recent empirical work from the Reuters Institute and others to help inform ongoing public debate and policy discussions about public service media in the UK and beyond, with links to the underlying research.

The public’s use of and perception of the BBC

The BBC is by far the most widely used source of news in the UK both online and offline, and it is one of the most highly trusted sources of news. It is also more widely used as a source of news than many of its peers among other public service media. According to the BBC itself, it also reaches more than 400 million people globally with news every week. 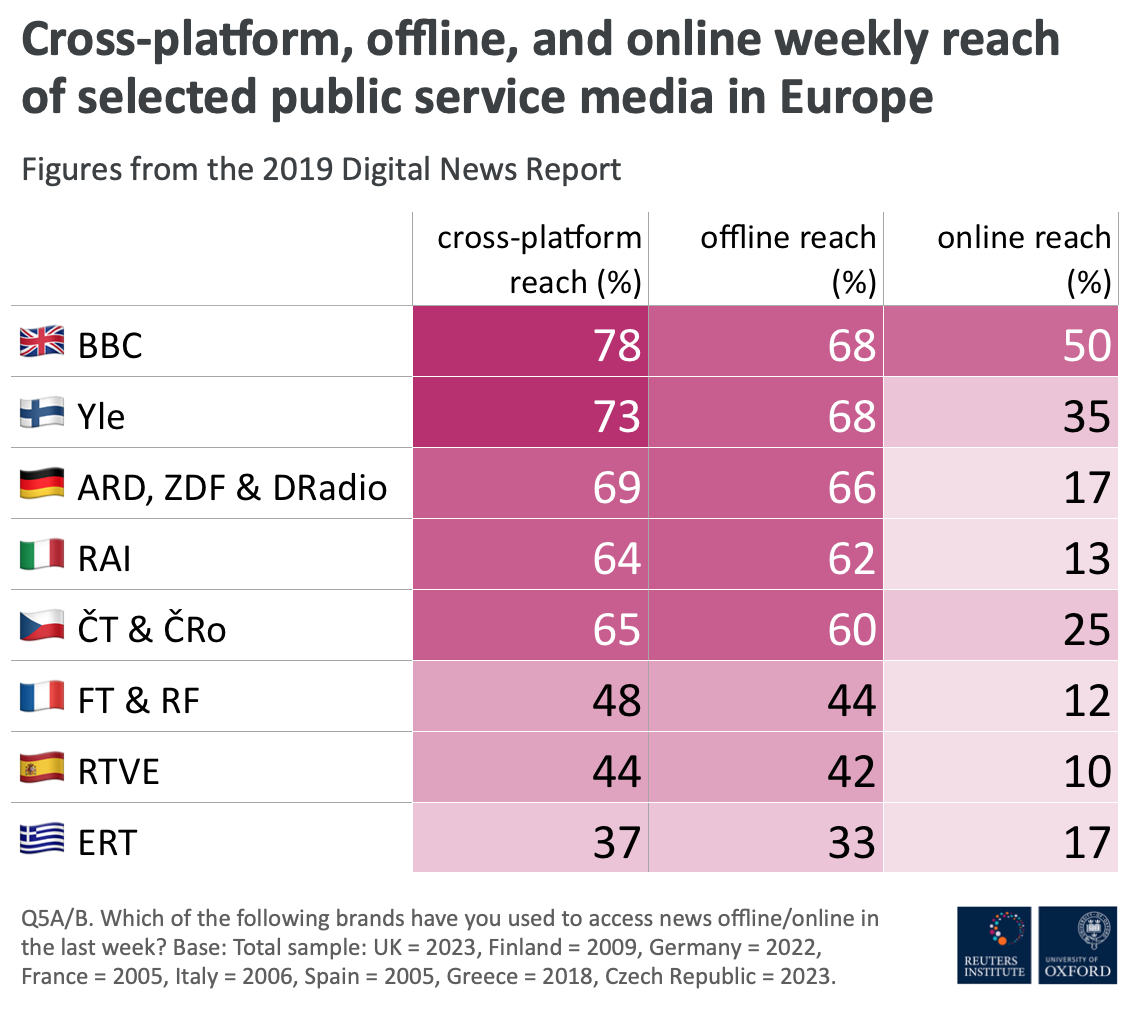 The BBC is very widely used across the political spectrum. It is the most popular source of news among both Conservative and Labour voters, and among both Leave and Remain voters. Similarly, the UK’s independent communications regulator Ofcom has found that large majorities of audiences in the UK value public service media providers like the BBC very highly for providing trustworthy news programmes that help people understand what is going on in the world.

Though the BBC is slightly less trusted by people who identify with the political right than by people in the centre and on the left, it is still as trusted on the right as major conservative newspapers.

When asked how well they thought each news outlet covered the 2019 election generally, 43% of our survey respondents said the BBC had done a good job, a higher score than any other news outlet in the country. However, 14% said they thought it had done a bad job - which was also among the highest. 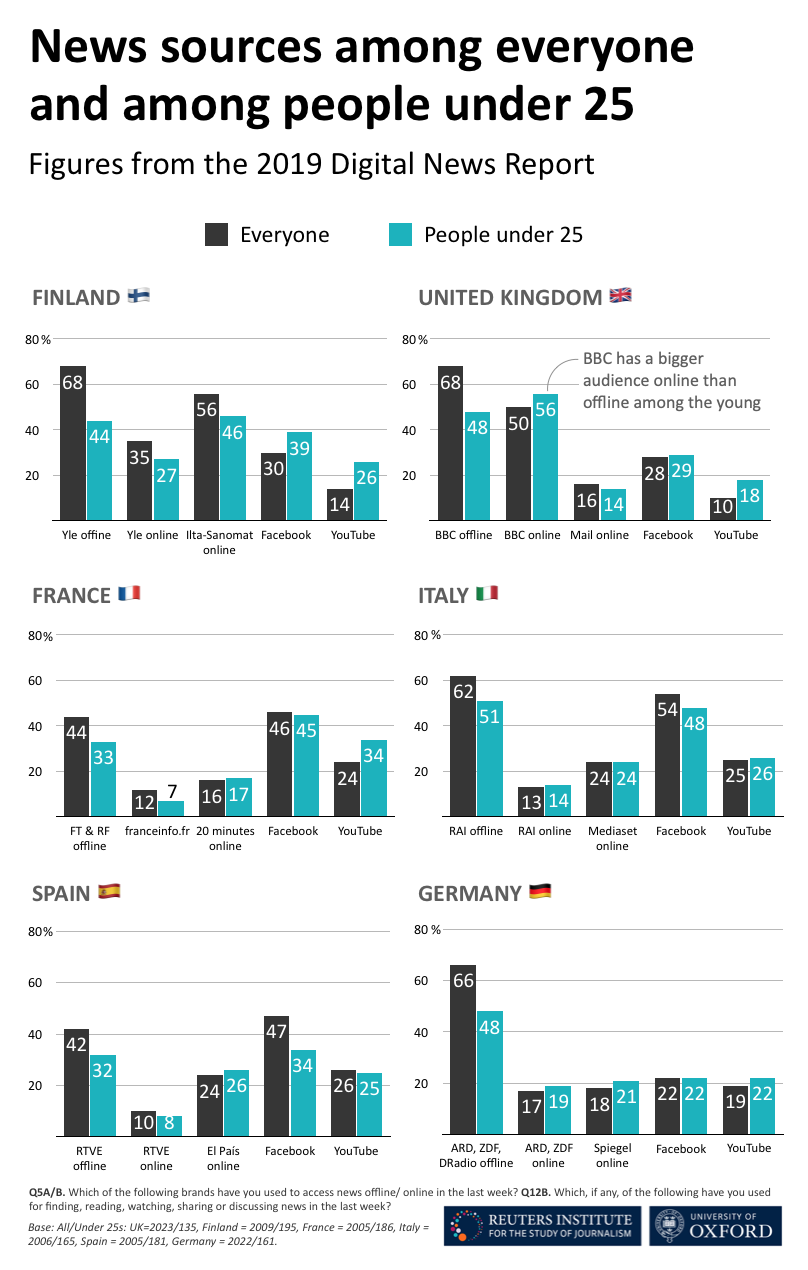 While it is widely used, the BBC has somewhat lower reach among younger people and people with more limited formal education. Like other public service media –and unlike some commercial media– its news audience thus tends to skew towards older people and those with higher levels of education.

Similarly, Ofcom has found that while BBC News has maintained its reputation among most people for trusted and accurate reporting, it is seen by some as representing a white, middle class and London-centric point of view that is not relevant to their lives.

BBC in a digital, mobile, and platform-dominated media environment

The BBC is the only online news provider in the UK more widely used as a source of online news than search engines and social media, which are increasingly important and popular ways for people to find and access online news.

This competition for attention from, for example, Facebook, YouTube, Netflix and in the future perhaps Tiktok and others will be increasingly important going forward as television and radio use is declining, while people are spending more and more time online and especially with social media and other digital platforms, as Ofcom has shown.

While there are important generational and socio-economic differences, digital media already dominate media use in the population as a whole. According to eMarketer, adults in the UK in 2019 spend on average 23% of their time with media watching television, 15% listening to radio, compared to 55% of time with media spent online across smartphones, tablets, and personal computers.

How does this match public service investment? According to the BBC’s 2019 Annual Plan, 69% of UK public service spending was committed to television, 21% to radio, and 10% to online services.

In this digital environment, the BBC’s position is very different from its traditional offline dominance. Given the intense competition for attention online from platforms, many other publishers, user-generated content, etc, BBC News only accounts for about 0.6% of the time people in the UK spend online.

This is nevertheless a significant share of the overall time spent with online news in the UK. During the 2019 election, the BBC accounted for 28% of the time people in the UK spent with news websites. 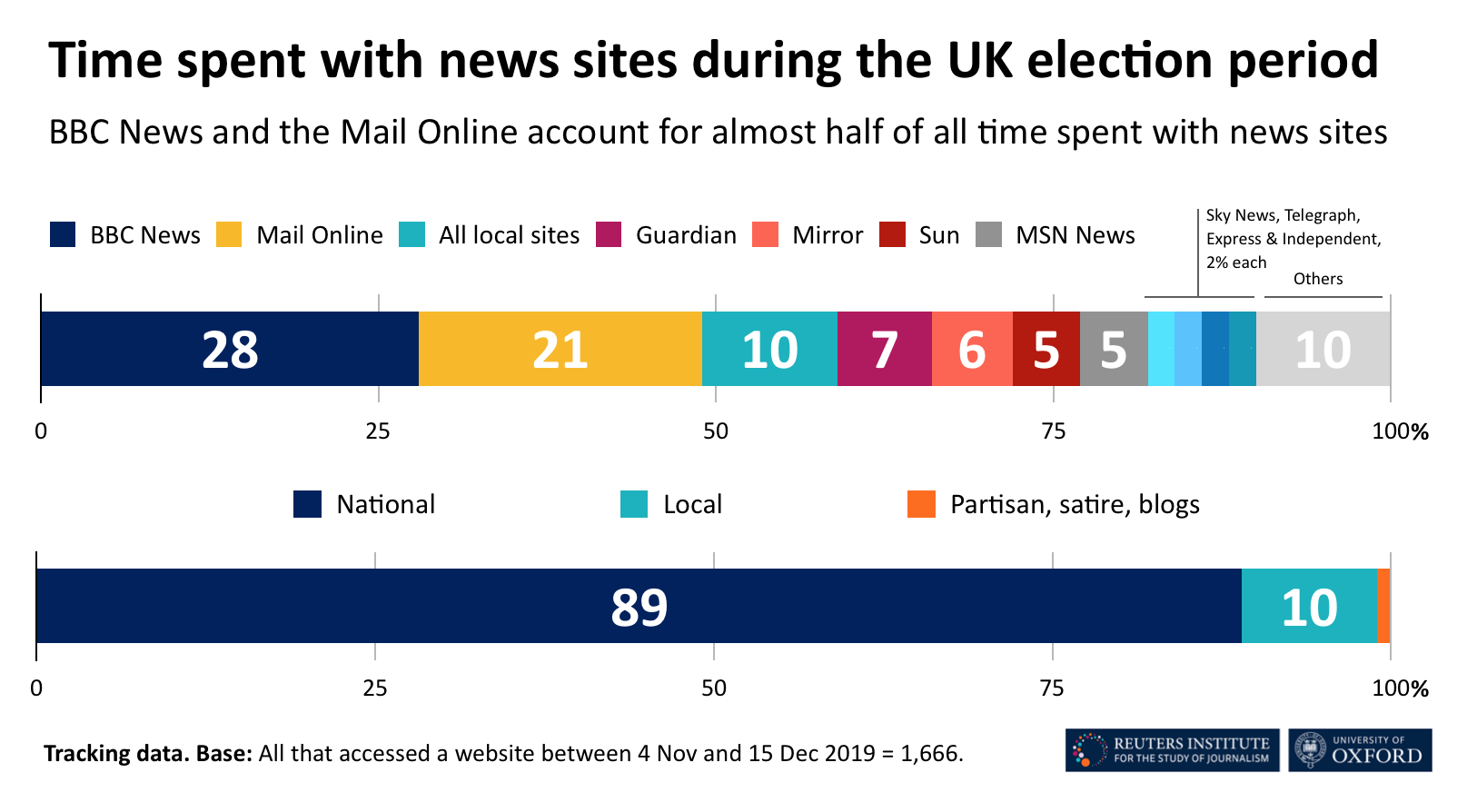 (Note the above numbers do not capture off-site engagement with BBC News on social media platforms. In both the 2017 and the 2019 general election campaigns, BBC News were among the most widely engaged with news sources on social media.)

BBC and its commercial competitors

Given its size, there is concern that the BBC might be crowding out domestic commercial news media, which would reduce diversity and undermine news provision – however, the most recent study looking at pay behaviour find no negative relation between using public service media and paying for online news or expressed willingness to pay for online news.

Across the European Union, countries with the highest per capita revenues for public service media also have the highest per capita revenues for commercial broadcasters - a correlation that holds even after controlling for national wealth. (To be clear: this correlation does not in itself suggest that spending on public service media in any way causes increased commercial broadcaster revenues.)

Constructive co-existence between private sector and public service media is important both for diversity and volume of news provision, which is why the risk of crowding out is important. While the BBC is the most widely used source of news in the UK, one study by Mediatique from 2011 suggests domestic commercial media represents the vast majority of investment in news provision, and the BBC about 1/5.

Looking at the content, other researchers have found that broadcasters with the most public service driven responsibilities –like the BBC– are, compared to other private competitors, proportionately least likely to cover the same policy stories as newspapers, and proportionally least likely to follow the press’ agenda.

The future of public service

Given its somewhat lower reach among younger people and among those with more limited formal education and the on-going structural shift away from legacy broadcast platforms where the BBC still account for a large share of use to a digital environment where the BBC is much bigger than most domestic rivals but far smaller than international competitors, the BBC’s ambition of universal service faces very significant strategic challenges going forward.

Comparative research looking at different cases across Europe suggests that public service media tend to have wider reach with their news in cases where they, like the BBC, are relatively well-funded, integrated, and centrally organized, and have a degree of strategic autonomy and insulation from direct political influence and greater certainty through multi-year agreements on public service remit, funding, and governance.

But even such organizations still struggle to reach younger people and people with more limited formal education, creating a risk that public service is funded by everybody but primarily delivered to already often well-served older and more highly educated people.

This matters because a number of studies have documented that public service media have a net positive impact on the amount of hard news produced and on the levels of political knowledge. By extension, it may also incrementally increase political participation.

(It is important to note that this research often finds the same positive impact for some forms of commercial media, most notably upmarket newspapers, and that research still suggests that especially newspapers produce the largest proportion of news output.)

The whole BBC and its incoming Director General will thus have plenty to do, dealing not only with political scrutiny, but also with a much more fundamental question of what truly impartial, high-quality and distinctive output and services look like in a digital, mobile, and platform-dominated media environment, and what public service looks like when it is based on the value delivered via mobile devices rather than the volume of attention attracted via broadcast sets.

Professor Rasmus Kleis Nielsen is Director of the Reuters Institute for the Study of Journalism and Professor of Political Communication at the University of Oxford. His work focuses on changes in the news media, political communication, and the role of digital technologies in both.

Dr Anne Schulz is a Research Fellow at the Reuters Institute for the Study of Journalism. Her doctoral work focused on populism, media perceptions, and news consumption. She is researching questions surrounding news audiences and digital news.

Dr Richard Fletcher is a Senior Research Fellow at the Reuters Institute for the Study of Journalism and leads the Institute’s research team. His primary research interests are global trends in digital news consumption, comparative media research, the use of social media by journalists and news organisations, and more broadly, the relationship between technology and journalism. He is lead researcher and co-author of the main Digital News Report – the world’s largest annual survey of global news consumption. 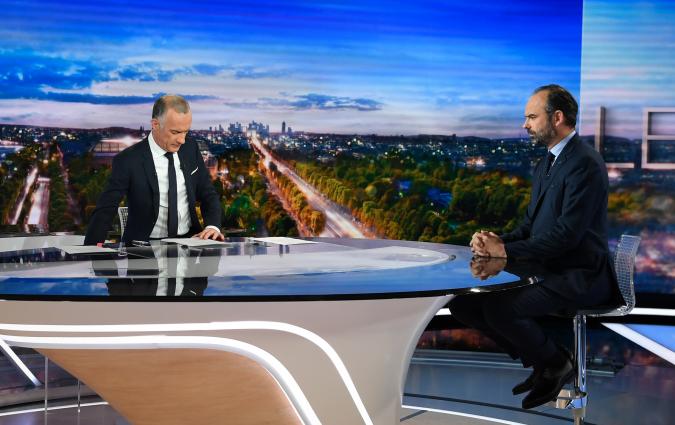 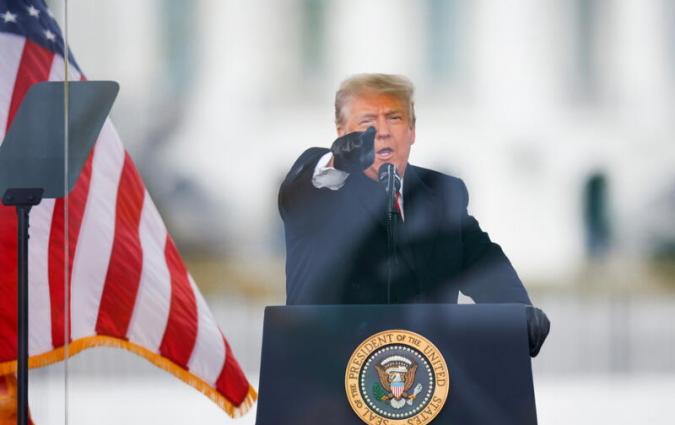 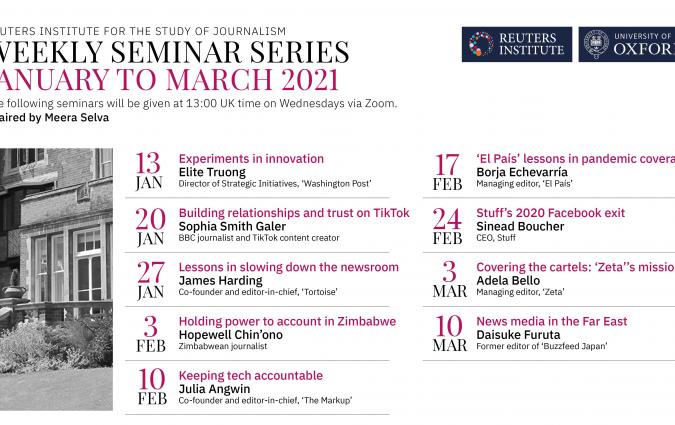