Journalism is not a given in people's lives. Here's how to rethink the future of news

"We are in an era of extreme creativity. We need to match that in news," writes BBC's Ros Atkins in this piece adapted from a recent speech 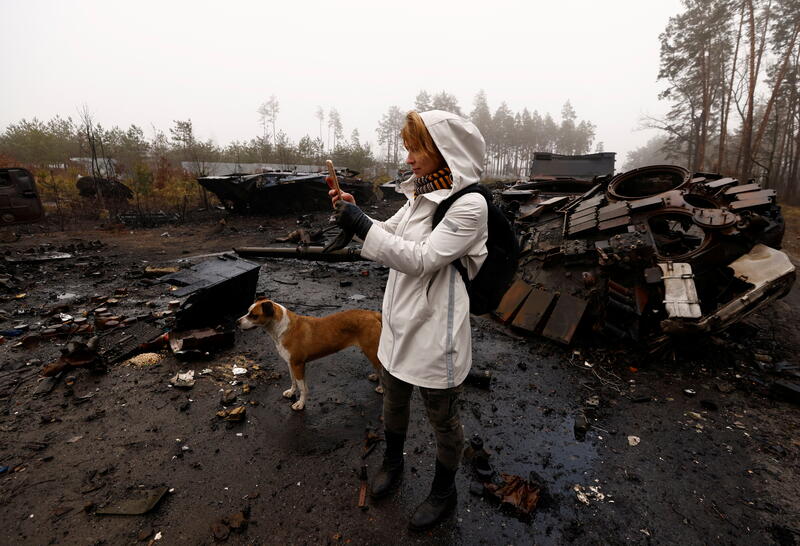 This is an edited version of Ros Atkins’ speech to the Society of Editors on 11 May 2022. You can read the piece in Spanish here.

I note my talk is called The Future of News – and that I have around 15 minutes to tell you what it is. I think at this point I should manage expectations. I’ve not got it all worked out. I definitely don’t know what the future is. But I have spent long enough trying to guess where we’re heading to have some rules of thumb – some guidelines that I hope give me at least a chance of working out how my journalism needs to evolve, and how organisations can evolve to give new types of journalism the best chance.

This work of innovation and modernisation can sometimes feel like an extra. The form our journalism takes, the way we structure our staffing, the way we structure our daily output, developing products – this can feel secondary to the stories. And I get that: we all became journalists because of a desire to hold to account, to uncover stories – to tell stories. None of that has gone anywhere. But for me the moment we’ve reached is asking fundamental questions about where journalism fits into our world.

Our place in people’s lives is not a guarantee.

So when I look at the need to innovate, to reimagine, to restructure what we do, it’s not because change is fun and creative and exciting – though it can be all of those things. For me this is a necessity. If you believe in the importance of journalism to our society, then actively engaging in what we need to become isn’t optional. This isn’t some distant moment.

What to do now

When we talk about the future of news, what we really mean is: what do we need to do now? Because we can see how radically people’s media consumption habits are shifting.

There is though a catch here. We can observe those shifts in habits – from linear TV to streaming, from print to digital, from branded digital destinations to social. But it's very hard to know what to do about it.

My career is littered with evidence of this.

In 2015, I was in Athens for the Greek debt crisis – and amongst other things was recording six second summaries of the story on Vine. That soon passed. In 2017, I was doing livestreams on Facebook from the BBC newsroom. They felt like the future. I’ve not done one for several years. In 2018, I tried to persuade the BBC to develop an app based around the touchscreen I used to use on Outside Source. The BBC declined (rightly) arguing that we didn’t need another digital destination.

Those are three examples. Believe me: I could go on.

But these false starts weren’t necessarily a problem, though maybe I didn’t feel that way at the time. For me they are inevitable. Because the degree of disruption that the internet has brought to our information ecosystem is so total, so huge, so unknown in many ways that we can’t expect anything other than a constant need to change.

And if there’s a constant need – certain things follow.

One is that we should expect this of ourselves. Innovation becomes a non-negotiable, just as we expect ourselves to be factually correct or to have good story ideas or to be fair. Another is that if the need to change is constant, our innovation should be constant. We should keep doing it. Again and again. Not everything is going to work of course – but there are things we can to do give ourselves the best chance.

I’ve been lucky enough to see some of my ideas blossom – from Outside Source to the 50:50 Project to our explainers to my podcast with Keith Olbermann. And I think I can see some patterns in what I’ve done and in what the BBC has done.

Now have a list of things (7 for me, 4 broader ones) that I ask myself if I’m working on a one-off idea – or on a new product. Some of this may seem obvious but it’s helpful to me. Here's the list:

1. What problem are we helping with? Are we clear on the need we are meeting? On one level, journalism is a service. It’s offering help. So what help is our idea or product offering?

2. What is different with this idea? An old editor of mine used to say, ‘We’re making news for people who know the news’. Beyond the basic facts of a story that may well be known, what is different here? What are we adding? Bluntly, why are we doing this?

3. Show them the journalism. Don’t assume people understand why this is better information than generally available. Show them the evidence – don’t just assert things. Make the case for journalism. Earn their trust. This is our greatest asset.

4. It needs a digital and social dimension. Money spent on journalism without digital element is not making the most of your investment. Success connects to sharing. My drum and bass mix on 6 Music is one of their most downloaded programmes of the year. Evidently it's not news, but there's still a lesson there.

First, I had to try and do a good mix (if the product isn't there the rest won't follow). But then I wrote a Twitter thread about DJing in the 20s and connecting it to this mix. It was designed to go viral and, happily in this case, it did. Without that, the mix wouldn't be one of the most downloaded programmes.

Build one (however informal) around your idea as soon as possible. When we relaunched Outside Source to better serve our digital audiences, we immediately involved designers, producers, editors, directors, marketing, engineers, digital. It was the same with our explainers. You maximise the chance of the idea developing well.

6. What’s your definition of success? Be clear on what you’re hoping to achieve – and if it’s not happening, stop or change how you’re doing it. Being able to stop is as important as being able to start.

I see so many digital examples of news organisations doing things because they feel they should – but no one is consuming what they’re doing. And yet they carry on. That it’s not working isn’t a problem. Not stopping is. You damage your brand and you waste resources.

7. There’s one more on my list – arguably the most important one – how do you want to tell the story? Again this might seem obvious – we ask ourselves this every day. But let’s be honest: our answers are often the same ones we’ve been giving for a while. And there’s risk here for us.

Digital isn’t only a distribution revolution – it’s a story-telling revolution too. Look around at how people are sharing their stories and talking about their passions – it often doesn’t look anything like news as we know it. From TikTok videos to gaming livestreams to comedy shorts on YouTube to threads on Twitter to podcasts.

We are in an era of extreme creativity – we need to match that in news. We need to look far and wide for our inspiration. Otherwise the news risks feeling tired and constrained for our audiences compared to what else they can consume.

What organisations should do

That’s my 7 points. But if individuals or teams are doing all of this, you’ll need an organisation that is doing certain things too. I’ve four things on this list. Again, they may seem obvious but I keep an eye out for them:

1. Build product and story innovation into your processes. If you make it part of your systems and routines, you have a far greater chance of it becoming habit. It also communicates that this is something the organisation expects.

2. Think about how you process and assess ideas. If you're asking for them, you may get a lot of ideas coming your way. But commitment to innovation doesn’t mean doing all of it. Saying no is important. So you need to clear on your criteria.

3. Don’t assume your brand will be enough. Brands can help a lot. Of course, I am completely reliant on the BBC’s journalism and reputation. But brands count for little if the content isn’t right. Be humble when taking this on. You’re going to have to fight for this however big you are. I start from the point of view that a new idea is not going to work (even if it’s a good one!) – and try and address all the reasons it could get stuck.

Without that flexibility, your best ideas will struggle. Don't underestimate the number of blocks that exist to the idea being made and being distributed well.

All of these things help me work out how to have the best chance of creating journalism that works for our audiences. I should add that what works now won’t necessarily work next year, so this remains a work in progress. That’s exciting as well as challenging.

Let us also be honest. As we survey British journalism, the form it takes in many cases is much like the news I consumed in the 1990s, the news that inspired me and made me want to be a journalist. But that was some while ago.

The future of news is here. It’s all around us in how people consume media content in a multitude of different ways. The test for all of us is whether we’re willing to take part.