"The broader question is who is deciding the news, who gets to have a voice, and how those who do speak are treated," writes Meera Selva 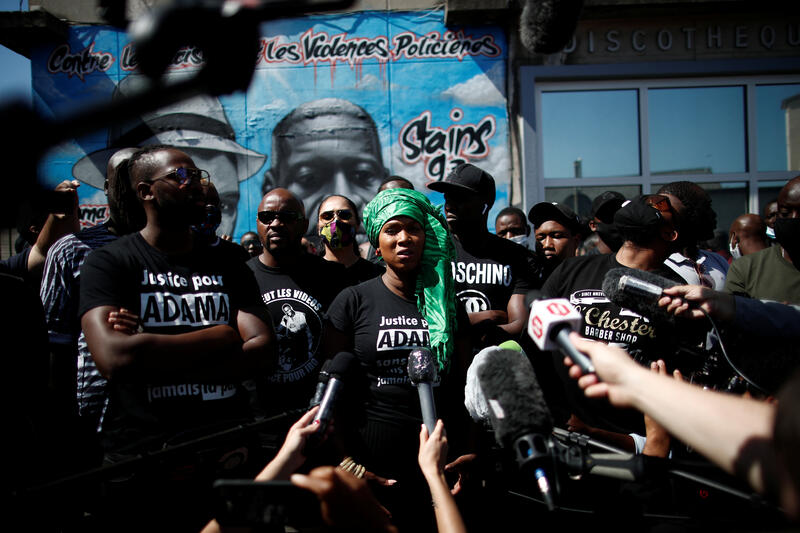 Assa Traore, sister of Adama Traore, who died in a 2016 police operation, talks to journalists in front of a fresco in memory of her brother and George Floyd in Stains, France. REUTERS/Benoit Tessier

Diversity in journalism is about power, narrative, discrimination and opportunity. A lack of diversity is at the heart of many of the challenges facing the industry, and solving this problem will in turn generate the solutions that ultimately take journalism into the future.

This is an issue we've extensively discussed at the Reuters Institute. Dorothy Byrne, then Head of News at Channel 4, spoke in no uncertain terms about how, if you do not have a properly representative newsroom, you will literally get the news wrong, and Shirish Kulkarni and Izin Akhabau from The Voice talked about building careers in journalism in newsrooms that fundamentally don’t get and often don’t care about who you are.

But one of the most powerful, and personal seminars came this month, from a talk with Shazia Majid, one of Norway’s leading investigative journalists and a columnist for the VG tabloid newspaper. The seminar, broadcast here, touched on the issue of just who has the right to speak about racism in the media industry.

In Britain, the topic received the most coverage after being raised by a white man. In his interview with Oprah Winfrey, Prince Harry spoke about how hurt he had been that his family, the Royal family, never spoke about the colonial undertones of news headlines and articles. He called the tabloid editors racist and bigoted in their coverage.

In response to these claims, the Society of Editors, the organisation that runs the UK’s biggest media industry awards in the UK, put out a rather bad tempered statement saying the UK is not bigoted and will not be swayed from its role of holding the rich and powerful to account. Several news editors distanced themselves from the remark, and several individuals and organisations pulled out of the awards ceremony in protest. The chair of the society, Ian Murray, stepped down. The society postponed the awards and is still debating what to do next.

The question of diversity in the media, however, should not be framed just as “are we racist or not” but needs to be part of a broader question on who is deciding the news, who gets to have a voice, and crucially, how those who do speak are treated.

Shazia spoke of how, after she first became an opinion writer in 2016, she faced a “tsunami of threats” after writing a piece on Donald Trump. And while she stood by her writing, she stopped. “I was afraid for my life, I was afraid for my kids. I was a single mother. I just needed to lay low for a while.”

After some years working as a respected investigative journalist, she felt ready to enter the world of opinion writing again, with more experience and more confidence: a trial by fire most comment writers outside minority groups do not have to pass before being allowed to express a view. This lack of diversity also means reporters from minority groups do not feel as supported in the newsroom, a particularly pertinent point considering that women and people of colour often face particularly vicious attacks.

A Muslim reporter in a Canadian newsroom spoke of how when she received hate mail, her editor told her to file a report with the police. When a senior white, male political correspondent received similar threats, the same editor took him out for coffee, went to the police station to help file the report and followed up to check on progress.

Ultimately, the issue of diversity in the media will only improve when diversity at the top of media organisations improves and the decision makers who define what a successful career looks like, and how a story is framed, represent the populations they are meant to serve.

There is a long way to go. A factsheet on race and leadership in the news media in five countries published in March 2021 by the Reuters Institute, highlights the problems. Only 15% of the 80 top editors across the 100 brands covered are non-white, despite the fact that, on average, 42% of the general population across all five countries:  the UK, Brazil, Germany, US, South Africa are non-white. If we set aside South Africa and look at the four other countries covered, 5% of the top editors are non-white, compared to, on average, 30% of the general population. In Brazil, Germany, and the UK, none of the outlets in our sample have a non-white top editor, despite having large and multicultural populations. This means that the news people see in these countries is ultimately decided by editors from one group.

This is both unfair and a huge wasted opportunity. Media outlets like Gal Dem and Black Ballad in the UK and Mother Jones in the US are attracting audiences who feel ignored and underserved by other outlets. They command loyalty and attention through innovative journalism and new perspectives, both of which all media organisations desperately need. Other publishers can achieve this too, just by rethinking just who and what the journalism they produce is about.