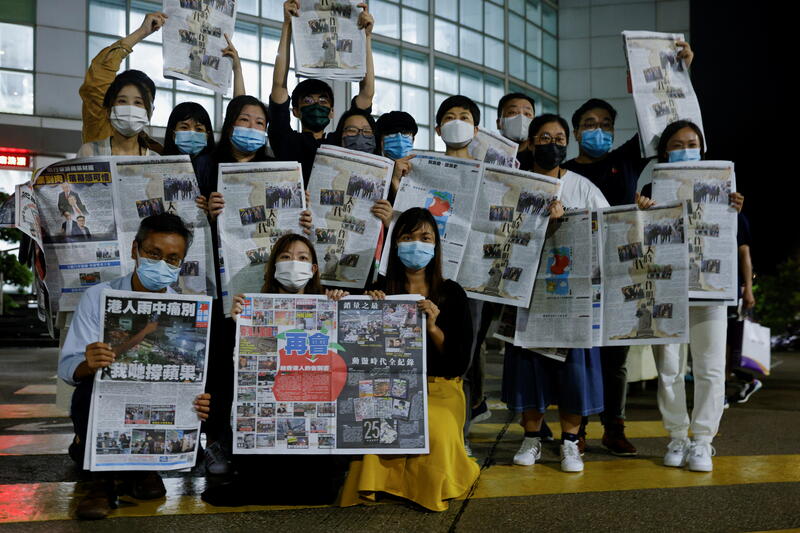 As media freedoms in Hong Kong shrink even further, journalists are discussing a new factor: how “pro-China” news publications set the terms of media policy in the region. At the top of the list are Ta Kung Pao and Wen Wei Po, two newspapers controlled by the Chinese government.

“It’s almost like you can tell who’s going to be targeted next, by seeing who the ‘pro-China’ media are reporting or lashing out at,” said Miss Wong, a journalist who’s worked in Hong Kong for over six years and who prefers to not give her first name for fear of being unable to work as a journalist.

“If those newspapers write disparagingly about someone today, they better be alert,” said Hari Kumar, a journalist who permanently departed from Hong Kong this year, after working in the region for 18 years.

There are quite a few examples of activists being detained, questioned or even arrested after these publications wrote about them .

Hong Kong has been in turmoil in the last few years. In 2019, millions of residents took to the streets in demonstrations against an extradition law which would potentially end judicial independence and endanger dissenters in the region.

In June 2020, China bypassed the local legislature and approved national security legislation which has drastic effects on free speech and personal security. As they often call for persecution of a dissident under that law in editorials and articles, the law seems to have given Ta Kung Pao and Wen Wei Po a shot in the arm. “Before the enactment of the National Security Law, ‘pro-China’ media may be doing the same, but what they reported or called for may not become a reality,” said Miss Wong.

In July 2020, after the National Security Law was passed, an editorial in Ta Kung Pao said pro-democracy figures like Joshua Wong and Nathan Law should face prosecution. Wong has since been charged for protesting. Law, who left before July, now lives in exile in the UK.

Herbert Chow, a businessman who ran for office in 2019, had a similar experience earlier this year. “First, the newspapers wrote about how I was anti-national,” he said. “Then, I had national security police at my stores,” he added.

Chow’s clothing brand Chickeeduck manufactured accessories and T-shirts which were a nod to the pro-democracy protests. A tote bag was a reference to the popular protest slogan “Five demands, not one less”. There were cushions and blankets with yellow birds holding umbrellas, the symbol and the colour of the protestors.

It is not that Ta Kung Pao and Wen Wei Po did not come to him for a comment when they printed a story against him. “When they did, I gave them a quote which made my stand clear, but they twisted my words,” he said.

Both Ta Kung Pao and Wen Wei Po have written extensively about how members of the General Union of Hong Kong Speech Therapists incite hatred towards the government and encourage violence among Hong Kong’s children. “What's more hateful is that the trade union used the name of ‘professionalism’ to ‘seek speculation’, packaging political ideas into fairy tales, vigorously instigating contradictions and instilling hatred, and attempting to poison the children in a way that is deceptive,” read a story in Wen Wei Po. In July this year, five members of the group were arrested by the national security police.

Ta Kung Pao and Wen Wei Po do not keep facts and opinions separate, observers said, and they comment on all aspects of the society.

The way the Chinese government and these newspapers function is circular. “When they raise any issue, the government comments on it. That automatically gains importance,” said a senior journalist who reports on politics and the judiciary and who requested her identity to remain hidden because she works on sensitive beats. “When we raise an issue, we find it hard to get a government response,” she added.

According to 2019 survey conducted by the Chinese University of Hong Kong, Ta Kung Pao and Wen Wei Po did not have wide readership. They ranked 10th and 11th place respectively when measured on credibility out of Hong Kong’s eleven paid newspapers. “The only people who talk about these newspapers are public officials. You will not see a person on the street picking them up,” said businessman Chow. However, with social media, content from such niche publications has more currency than before. “If one person shares an article on Facebook, that reaches those who otherwise would have never seen it,” said a former journalist at Ta Kung Pao, who works as an editor in another publication.

In addition to this, independent news outlets are increasingly being forced to self-censor due to threats posed by the National Security Law, recently wrote Sarah Cook, Research Director for China, Hong Kong and Taiwan at Freedom House.

What made Hong Kong a beacon of press freedom was that official and financial information was easily available. But in the past few months access to information has been very tough, journalists said.

Under the colonial rule

According to the agreement by which the UK handed Hong Kong over to China in 1997, the region was to maintain its autonomy and freedoms for 50 years. However, after 23 years, China has begun to assert its authority over the region in oppressive ways.

During colonial rule, Wen Wei Po was not a puppet in the hands of the Chinese Communist Party, said Viswanathan, a former editor-in-chief of the Hong Kong Standard who has worked in the region for six decades. “About a dozen journalists from Wen Wei Po resigned in protest after Tiananmen,” he said.

The newspaper, founded in Shanghai, also wrote an editorial criticising the Chinese government. Its prominent journalist, Kam Yiu-yu, was forced into exile in the US.

Ta Kung Pao was founded in 1902 in Tianjin, a port city in northeastern China. Almost two decades later, a prominent Chinese journalist, Zhang Jiluan, bought it and increased the circulation manifold. In 1941, the Missouri School of Journalism awarded the newspaper a medal for distinguished service, for its reporting on developments in China. In 1948, as the world was decolonising and the Communist Party was gaining significance in the mainland, Ta Kung Pao was taken over by the regime.

It is important to remember that these newspapers existed before the Chinese Communist Party (CCP) came into power, Viswanathan added. “Now, the CCP uses them for its own benefit,” he said.

In 2016, the two newspapers merged and today they are overseen by the State Information Office, the central propaganda ministry, as Xinhua news agency and CCP’s the People's Daily.

Once considered a haven of free media in the region, Hong Kong is now seeing its freedoms shrink. In 2002, Hong Kong came 18th in RSF’s World Press Freedom Index. This year it has been pushed back to the 80th place.

In early September, sitting in a club in the main business district of Hong Kong, six journalists were toasting to “whatever freedom is left in the region”. They warned each other of what Ta Kung Pao and Wen Wei Po had been writing about in the past week. One of them, a journalist who reports on local news in Hong Kong, had been featured extensively. He smiled and said: “These papers are like crystal balls. If they say you should be arrested, rest assured, my friend, you will be.”