Here are a few highlights from speakers such as Joel Simon, Dmitry Muratov, Patrícia Campos Mello and Irene Khan at TRF’s flagship event 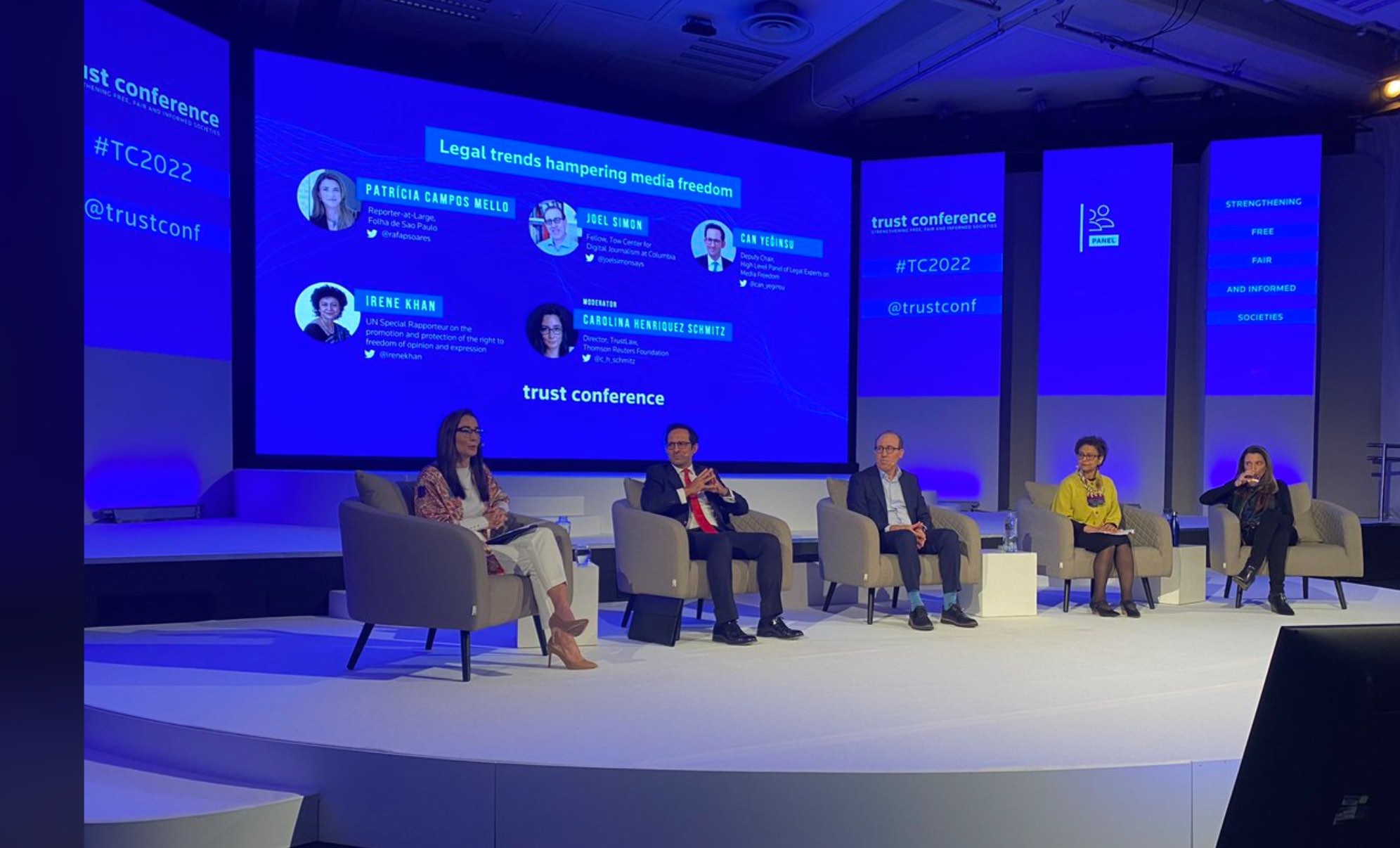 Three years after the last in-person gathering before the pandemic, hundreds of delegates congregated once more in central London for the Trust Conference, an annual event organised by the Thomson Reuters Foundation. Speakers included journalists and human rights experts such as Patrícia Campos Mello, Joel Simon, Irene Khan, Eliot Higgins and our Director Rasmus Nielsen. Here are seven takeaways from the conference on the situation of journalism worldwide.

🗣️ “The absence of media independent from the state is directly related to repressions against the consumers of such media."

2. These have been the toughest elections for Brazilian journalists. In a panel moderated by CNN Chief International Anchor Christiane Amanpour with this year’s winners of the Kurt Schork Awards, the conversation turned to the challenges the panellists face in their day-to-day work. Rafael Soares, an investigative reporter at the Brazilian newspaper Jornal O Globo, pointed to Jair Bolsonaro’s attitude towards journalists. “These are the toughest elections I’ve covered in Brazil,” Soares said. “Bolsonaro provokes journalists and makes his supporters hate our job, and this is very bad for our coverage.”

3. Documenting war crimes depends on on-the-ground reporters, but their safety is increasingly expensive. As part of the same panel on press freedom, Jason Motlagh and Kenneth R. Rosen discussed the risks that freelance journalists face when reporting from the ground in conflict zones and other high-risk areas.

Despite a shift in the news industry towards protecting freelancers, many still have to pay for their own insurance costs, which can be prohibitive. Recognising the work of local producers and so-called ‘fixers’ and their safety is also key. “The next frontier is extending this conversation to freelancers, to local journalists... and giving them the same benefits, the same security and backing in the event that something does go wrong," Motlagh said.

🗣️ "My wife and kids have to figure it out. I used to be able to afford high-risk insurance but now that's astronomical."

– says journalist @kenneth_rosen on the lack of support available as a freelancer and why, for that reason, the #KurtSchork Awards are so important. #TC2022 pic.twitter.com/5x1Pxiwr2l

"Governments are becoming more and more sophisticated with how they use the law to curtail press freedoms," said Joel Simon, a fellow at the Tow Center for Digital Journalism at Columbia University. The other panellists echoed Simon’s point and discussed how entities looking to stop reporting on certain issues are now going beyond media law and also exploiting other legislation to achieve this.

"We're being sued systematically," said Patrícia Campos Mello, a reporter-at-large at Brazilian newspaper Folha de São Paulo. “Instead of dedicating our time to investigating, we are spending our time talking to lawyers."

🗣️ "There are new laws and new ways, in which laws are being weaponised to curtail press freedom."

5. We need more legal protections for journalists. Panellists also discussed how the law can protect journalists against harassment and abuse. This is a particularly important issue for women journalists, who face attacks that "tend to be highly sexualised, well coordinated and vicious," according to the UN Special Rapporteur for Freedom of Opinion and Expression Irene Khan. Panellists also talked about the grim statistics of this year, including high numbers of journalists’ deaths, and of impunity for those killings.

🗣️ "If the state is not willing to investigate killings of journalists, then how can state institutions protect journalists?"

– says @UN's @Irenekhan on the devaluation of media freedom in countries where these cases are rife. #TC2022 pic.twitter.com/3r0TuDwpLx

6. Prebunking disinformation is better than debunking it after it spreads. In a fascinating spotlight talk, Bellingcat founder Eliot Higgins described an engaged online community that uses open-source tools to examine and debunk false videos and images of the conflict in Ukraine.

In one of the cases that Higgins described, a faked video “was debunked so quickly by a community that was engaged with open source investigations that it didn't really have the impact they wanted." This is known as ‘prebunking’, and is very effective at combating disinformation.

🗣 “The use of open source investigation this way by major media organisations is being done on a scale that we’ve really not seen before. This… really is a huge change.”

– @Bellingcat Founder @EliotHiggins explains how #OSINT has made an impact on mainstream media. #TC2022 pic.twitter.com/cZmP3AhPQy

7. Old business models for journalism are broken. Tools such as crypto may have a role to play in creating new ones. “The business models that worked in the 20th century are broken because they don’t solve problems anymore,” our Director Rasmus Kleis Nielsen said in a chat about crypto’s role in helping further media freedom. “Journalism as a profession, and the news industry as a business, has to focus on the problems people actually have rather than the problems they used to have."

One of those problems, for many independent news outlets facing state censorship and harassment, is funding. In those cases, “it’s really neat to be able to receive money in a way that is peer-to-peer and that the government can't stop and knows a lot less about,” said Alex Gladstein, Chief Strategy Officer at the Human Rights Foundation. For an outlet in that situation, cryptocurrencies such as Bitcoin can help, given their independence from state control.

🗣 "If an autocratic dictator is trying to ban it or force it to act on their behalf, on balance it's probably something that empowers individuals."