Reframing the story: our panel discusses how to keep audiences engaged at the US launch of the Digital News Report 2022 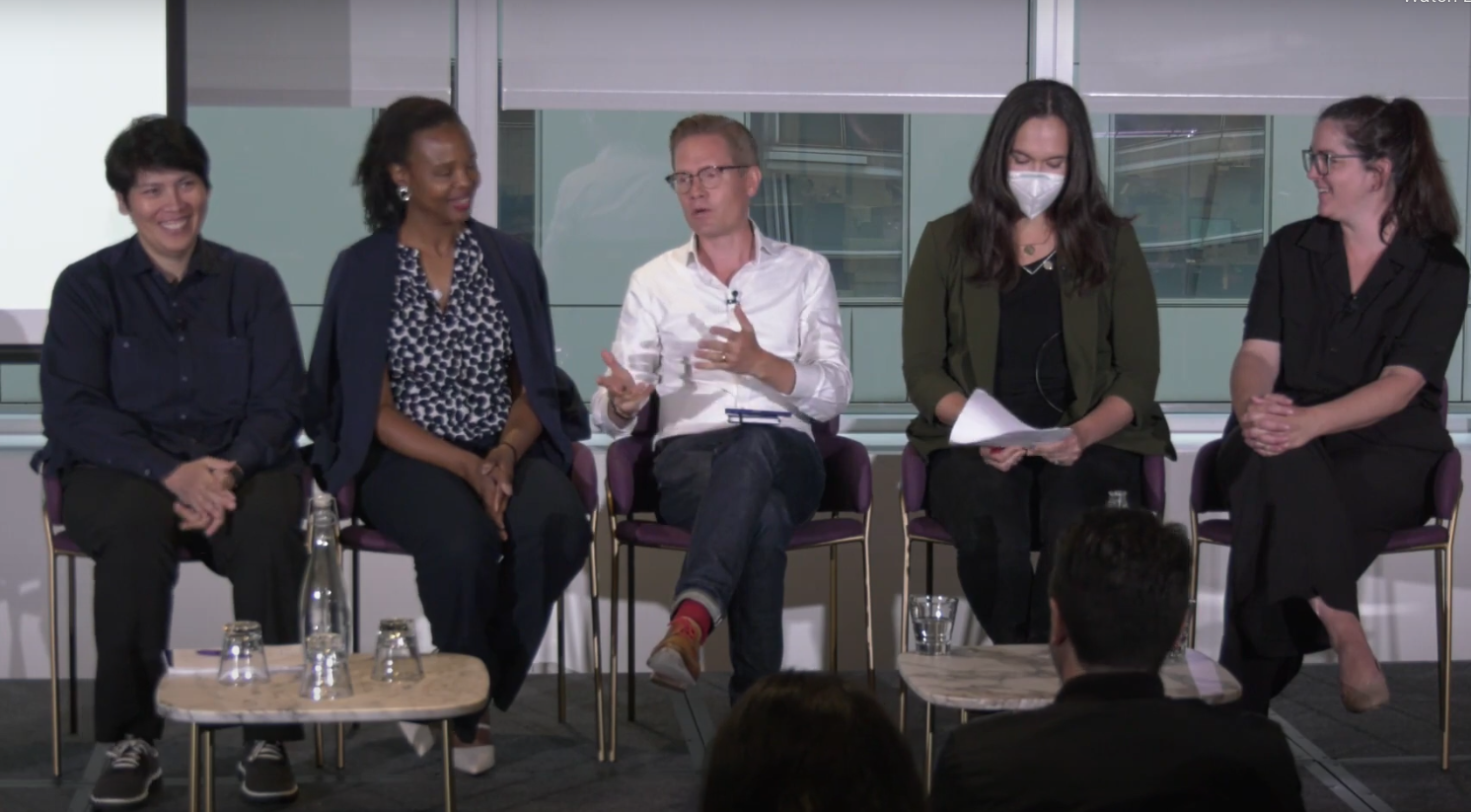 The news story is ‘the atomic unit of everything we do’, Monica Drake from the New York Times said at the US launch of the Digital News Report 2022. And the news story was also at the heart of the panel discussion at the event itself: how to reframe it in order to fight news avoidance, appeal to younger audiences and win over new subscribers. Our speakers highlighted innovation and experimentation but stressed the importance of keeping true to the fundamental principles of journalism: trustworthiness, a fair if not always purely objective approach, and a dedication to serve audiences with the most important news.

How to fight disconnection

The panel kicked off by discussing news avoidance, the main focus of this year’s Digital News Report. There’s been a steady rise in the proportion of Americans who actively avoid the news in recent years, from 38% in 2017 to 42% in 2022. According to Melissa Bell, publisher of Vox Media, rethinking format is key in the fight against this phenomenon.

“We have been stuck in a format in news that is primarily an older technology. It’s print news organised as a print newspaper that we've moved online, and didn't do much to adapt to it. And I don't think that is allowing audiences to interact with that format in a way that reaches them and addresses their needs today,” she said. Bell suggested that approaching journalism as a service to audiences might be a good alternative.

One way the New York Times experiments with formats is through live blogs, Drake said, as they “feel more native to younger readers.” Content is also important when appealing to young and underserved audiences. “We try to publish things that are unpredictable. We, of course, look for the truth. We look for the dramatic story that no one quite knows yet,” she said. But they also aim to be more transparent, said Drake, who stressed that “younger readers want you to show receipts.” Finally, making their online articles easy to find even when the searcher is not necessarily looking for news is important to broadening the the newspaper's reach.

When asked about the ‘emotional barrier’ to news and the possible use of algorithms to gauge how readers feel about stories, Drake said that the reason the New York Times is not using this practice is because some of the most important stories that need to reach readers are inevitably going to negatively affect their feelings. “The thing that we probably do that's closest to thinking about feelings is actually thinking about readers and developing relationships with them that's a little more holistic than delivering just the headlines and trying to serve them,” Drake said, giving examples of products that may be more uplifting, such as recipes and games.

For Bell, taking readers’ feelings into account by focusing on practical ways people can address problems is key not only in keeping audiences engaged but also in increasing trust. “I really do think that we should all take a hard look at the feeling of powerlessness. I really do believe part of the reason why we saw an increase in trust around our reports on COVID-19 was because we were helping people with their lives, to understand the latest information about: what were the requirements of a mask and when should you get vaccinated and what's the science behind it? And if we treat more stories like that, I think that we would be able to really see, even in the toughest of stories, an increase in both trust and less avoidance,” she said.

Subscriptions and the business of news

For Arlyn Gajilan, Digital Director at Reuters, the challenge is to cater to the different levels of users that end up on the Reuters site. The aim is to “try to entice them to engage with you further and go from casual user to registered user to loyalist and hopefully evangelist,” Gajilan explained.

However, the rise in the number of news outlets using subscription models has led to “a very crowded market,” Bell said. “There's also definitely a challenge with creating strong accessible journalism for everyone and not just for those who can afford it.”

Vox’s answer to this problem was a contributions model. “What we found was that our audience wanted to support the work in part for others to be able to access the information for free. That was a strong, resounding answer when we surveyed them as to why they were motivated to contribute. And it really solidified the fact that there's something in this desire of the audience to help support others,” Bell said.

Polarisation and trust in news

This year’s Digital News Report found a global decrease in trust in news. Only 26% said they trusted most news most of the time in the US, a figure partly driven by political polarisation. “Once that trust is breached, it's easily lost,” Gajilan said. “I think the value for [Reuters] is having boots on the ground in situations like Ukraine, but also having the kind of nuanced business coverage that talks about the macroeconomic implications. And then, from a policy perspective, we also do the geopolitical angle to it. So we're trying to offer up a 360 degree view for anyone who comes to us.”

Fostering trust is an active effort for the New York Times too. “We created a cross-functional team of journalists, people from product, to really think about how we can be more transparent and also how we can prove every day that we’re a trustworthy source of the truth. We've made a significant investment in more transparency about our news gathering. We've also been much more forthright about the fact that we send people all around the world including to war zones to gather information,” Drake said.

Trust is also at the heart of things for the Google News Initiative, said Olivia Ma, Director of the Google News Initiative. “The whole premise of search is based on the notion of ranking and ranking is really a way to try and create the most relevant, trustworthy and authoritative answers to a question that somebody has. So we are highly incentivised, both from a mission standpoint and from a business model standpoint, to make sure that we are showing the most trustworthy and relevant information at the very top of search results,” Ma said. “We think about it very much through the lens of expertise, authoritativeness and trustworthiness, without any notion of political leaning one way or the other.”

Objectivity is sometimes a divisive element in the conversation about trust in news. Some outlets, such as Reuters, take a strict line to protect their reputation as an objective news source while others are more relaxed about this. Vox Media, some of whose products appeal to younger audiences, takes a slightly different approach. Bell explains how, while still going about the process of reporting in an objective manner, outlets can also acknowledge that reporters come to a story with a point of view, a particular background and set of experiences. Being transparent to readers about this can help foster trust and also create engaging journalism, she explained.

“Some of the best reporting that we do at Vox are reporters who say, 'I came to the story with one hypothesis and I'm leaving it with a different one. I'm taking you on the journey of my own understanding.' The joy of journalism is that we get to actually pursue our curiosity and learn through the process of reporting and we should be bringing the audience along with us in that joy of the journey,” she said.

This conversation inevitably veered into journalists’ behaviour on social media. As well as the debate about objectivity, social media presents other issues related to how individual journalists present themselves, while still being publicly affiliated with an outlet. Reuters’ Gajilan said: “It's tough because there is kind of a generational shift about how people should behave, let alone on social media, which is often a slippery slope and at best, just squishy ground.” For Reuters, the challenge is related to obtaining and keeping young talent who may have a different understanding of being a journalist compared to the traditional, pre-social media reporter: “How do you keep true to what you do as a newsroom while accommodating a crew of people who expect to have a personal brand?” Gajilan asked.

This is one among many challenges media organisations face as news adapts to a shifting digital landscape. As more young people start to prefer visual content above text and traditional news sources and even news topics become less important to younger people, the story, the atomic unit of journalism, is going to be presented in new and evolving ways.