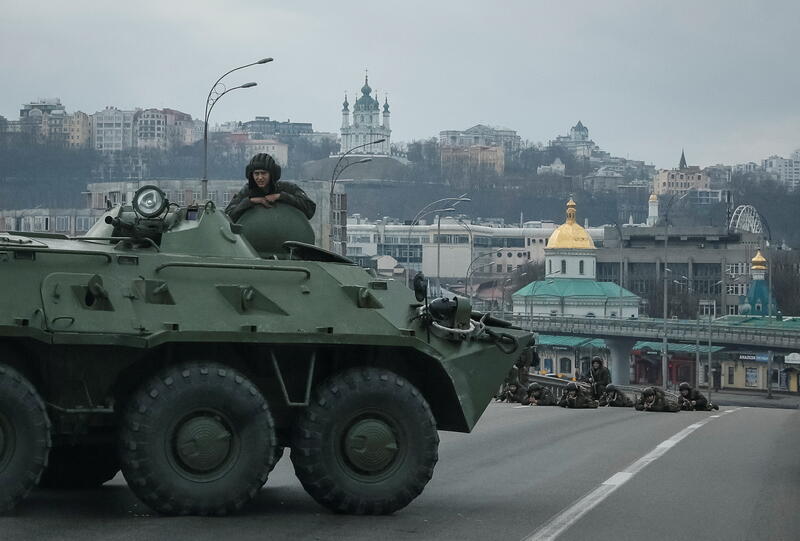 Dr Olivia Durand is a researcher at the Institute of Historical Justice and Reconciliation as well as a postdoctoral research fellow at Freie Universität Berlin. Olivia remains a postdoctoral associate at the University of Oxford, where she carried out her DPhil in Global and Imperial History. She is the co-founder and director of Uncomfortable Oxford, an initiative to uncover uncomfortable aspects of Oxford’s history such as the legacies of imperialism.

For journalists reporting on the war in Ukraine, awareness of historical context is particularly important. Vladimir Putin’s justification for the conflict is partly based on a misrepresentation of history, laid out in his infamous hour-long speech on 21 February as well as in a piece he wrote in July 2021. For journalists without an extensive background of reporting on Ukraine, these may be difficult issues to navigate. In this interview, Olivia Durand gives an overview of the history of Ukraine and outlines what journalists should look out for to ensure historically accurate and sensitive reporting on the war.

Q. Language, spelling and pronunciation used in reports can at times take on additional, unintended meaning. What pitfalls should be avoided by international reporters not so familiar with Ukraine and its history?

A. It’s important to use the name, ‘Kyiv’, rather than ‘Kiev’. That's one of the big things and I think there's been an adjustment in the reporting. Even before the invasion you could see the word ‘Kiev' used a lot less and ‘Kyiv' replacing it. [‘Kiev’ is derived from the Russian spelling, ‘Kyiv’ from the Ukrainian.] In 2014, and in the years after that, journalists very often would say ‘the Ukraine’, rather than ‘Ukraine’, and ‘Ukraine’ is the name that's on the Declaration of Independence and the official name of the country. When it was the Soviet Republic of Ukraine, there was often this tendency to say ‘the Ukraine' as a sort of short name, but post-independence Ukraine is ‘Ukraine'.

Q. Putin gave a long televised speech on 21 February in which he wrongly claimed that Ukraine is an artificial creation of Lenin’s and implied it has no right to exist independently of Russia. What is the historical context behind these claims and how should journalists have reported them?

A. There are efforts to claim common ancestry between Ukraine, Belarus, and Russia. They all claim that they originated from the Kyivan Rus'. The Kyivan Rus' was a mediaeval state, and when the Vikings came, you had this prince of Kyiv, Volodymyr, who accepted Christianity. Of course, Kyiv is in the centre of modern Ukraine. Ukraine sees its origins centre in the city of Kyiv and the Kyivan Rus'. But Russia also historically tried to link back to the Kyivan Rus'.

This has something to do with religion, when the Tsars were saying: “We're chosen by God, God has chosen us to be autocratic leaders of Russia.” And they would try to activate this connection with the Kyivan Rus' because this religious argument was very strong, because Kyiv was one of the main centres of Eastern Christianity, and also would provide a lot of religious officials to Moscow.

Then in the 18th century, you start having this discourse about Great Russia, which is Russia, Little Russia, which would be Ukraine, and White Russia, which is Belarus. This kind of discourse very much originated from Russia. And it was a sort of proto-nationalising discourse, something that was trying to define the state alongside common culture and language and tradition and history and so on.

However, if you look on the side of Ukraine, there was the Cossack Hetmanate, which was a very traditional group that Ukrainians link themselves back to. In 1710 the Cossacks wrote a constitution which created a sort of complex Parliament, and they separated the three main powers: the judiciary, the executive and the legislative. So that's the Bendery Constitution of 1710. And it is written both in Latin and also in old Ukrainian, so you have the Ukrainian language in writing, present there.

You start having a Ukrainian nationalist movement in the 19th century, when modern-day Ukraine was part of the Russian Empire, with people like Shevchenko, who was a very famous Ukrainian writer and was also very interested in languages. Initially it was actually encouraged by the Russian authorities, because they saw it as a counterpoint to Polish influence, and they were very worried about the Polish independence movement, which was also very active. However, from the 1870s and after a Polish uprising, it was completely forbidden to publish anything in Ukrainian. There was a very strong anti Ukrainian policy that went hand in hand with anti language policies.

What followed the invasion of Ukraine by the Soviet troops was the creation of the Ukrainian Soviet Republic. Not just the creation of that state, but also the creation of all the other Soviet republics. And in some way, it was a reaction to the fact that there was a very strong nationalist movement in Ukraine, and a realisation by Lenin and other people in the government in the early 1920s that they had to accommodate the nationalist aspiration that existed in Ukraine.

Q. Kremlin’s propaganda often wrongly portrays modern Ukraine as a country where Nazis and far-right militants are prevalent. Putin himself justified the invasion as a way to “denazify” Ukraine. What should journalists know about the relationship between Ukraine and Nazi Germany in the past and about the real prevalence of the far right in today’s Ukraine?

A. Ukraine was kind of the dead zone in Europe that was invaded and controlled by both the USSR and Nazi Germany, especially after the the end of the pact between the two countries. In the west of Ukraine, you had elements of a very ultra nationalist Ukrainian group, and they collaborated with the Nazis in the west of Ukraine after that part of the country was conquered by Germany.

They enabled the killing of the Jewish population in that region and also the killing of a lot of Poles. However, again, we're talking about one specific group during the war. There was the Vichy government in France, and Oswald Mosley in the UK, and there were Nazi parties in every single European country.

Today, you do also have small, far right groups in Ukraine, I think you have three or four of them. There's only one which has one elected representative in the Parliament of Ukraine. The president of Ukraine, Volodymyr Zelenskiy, is of Jewish descent.

There is a strong narrative in Russia about the Second World War, or as they call it the Great Patriotic War. And Putin is trying to frame his actions in this legacy of the Great Patriotic War against Nazi groups. So having this kind of call for the denazification of Ukraine again, it can be a move for popularity, to gain votes. Whenever there are conversations against Putin, there’s always this tendency from him to show himself as a strong man or this strong commander or natural leader. What's also interesting is that the rhetoric by Stalin following the Holodomor [the Soviet-created famine that killed millions of Ukrainians in the 1930s] was that it was something to help denazify the country, which I think is very disturbing.

Q. Finally, more generally: is there anything else that foreign journalists should keep in mind when reporting on the invasion in terms of historical nuance?

A. Ukraine is a democracy. It's not a perfect democracy, and there are many, many issues: economic, social, political. But it is a democracy. There's a free press in Ukraine. It is not an autocratic state. It is a country, a democracy that has been trying for the last three years to be its own sovereign country and to make choices that are supported by the population. And the choices of not remaining under the Russian sphere of influence are democratic choices. And I think that's very important to keep in mind. Russia is not a democracy even though Putin is technically elected. In Russia there's not a free press.

And it seems that the Russian aggression over the last eight years has brought people in Ukraine closer to each other, and has pushed them even more to look at what it means to be Ukrainian. I have many Russian-speaking Ukrainian friends who have decided to learn Ukrainian. And there's definitely a move towards understanding what it means to be together rather than being part of Russia.

Q. Can you recommend three books on Ukraine’s history or modern-day culture that journalists may find useful to better understand the country?

A. The Gates of Europe: A History of Ukraine by Serhii Plokhy, Children of Rus': Right-Bank Ukraine and the Invention of a Russian Nation by Faith Hillis, and Europe’s Steppe Frontier, 1500-1800 by William H. McNeill.