Looking for "nuggets of hope": our panel discusses how to beat news avoidance at the launch of the Digital News Report 2022 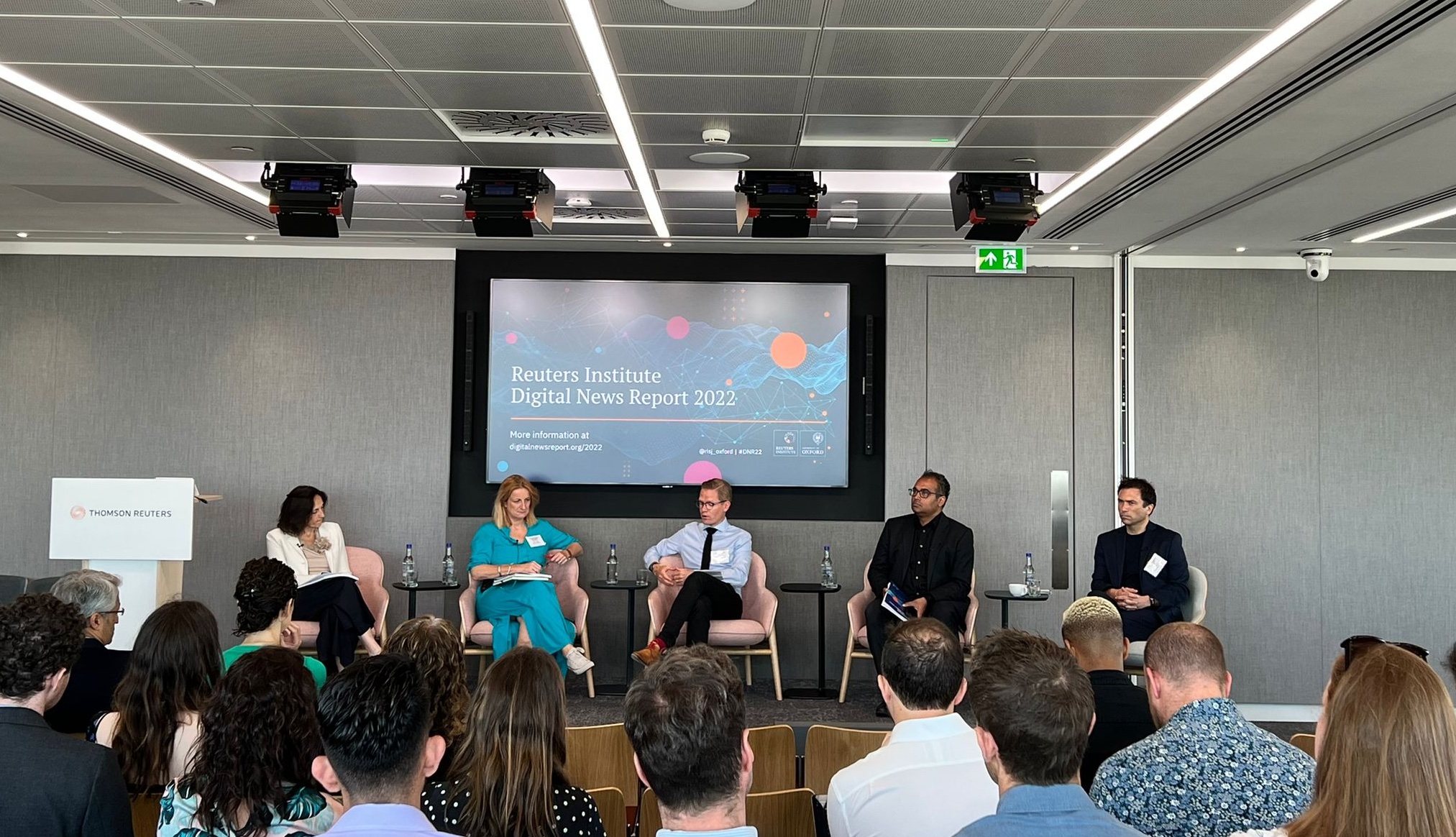 Higher rates of news avoidance and stalling trust in news are a challenge for journalists to meet rather than something to feel defeated by, Ros Atkins highlighted at the global launch event of this year’s Digital News Report, the most comprehensive study of news consumption worldwide.

The panel kicked off by discussing the rise of the number of people who avoid the news on purpose. We found 38% in our global sample who say they often or sometimes avoid the news (up from 29% in 2017), with the number of avoiders doubling over five years in the UK, where all the members of panel are based.

Alison Phillips shared how The Mirror is tackling news avoidance by focusing on three things: explaining the news, telling it through people’s stories and spotlighting solutions and what she called ‘nuggets of hope.’ “The key to great tabloid journalism is, if you’re telling any sort of complicated issue, if you’re telling it through a real person’s experience, it’s far more relatable, it’s far less overwhelming and depressing,” Phillips said.

Krishnan Guru-Murthy pointed out that news avoidance alone is not the full picture. “Our experience in the first half of this year is that our audience is up year on year in absolute volume and share,” he said about Channel 4 News. What’s different, he said, is the way people are consuming news. They are not switching on news bulletins to find out if there is any news, but they are doing so when they know there is news they want to understand. This is what news organisations should focus on to address news avoidance, he said: “People want to understand the news, they don’t want an avalanche of death and destruction that they don’t understand, feel powerless to do anything about and see no hope.”

Another factor contributing to news avoidance that Guru-Murthy identified is a tendency for large, mainstream media organisations to fixate on a single story that is covered in great detail and depth, rather than presenting a variety of high-quality news stories. Examples of these single stories named by Guru-Murthy were the pandemic, Brexit and the ‘Partygate’ saga in the UK. The digital news report found that 43% of respondents from all markets say they are put off by the repetitiveness of the news agenda, especially around politics and COVID-19.

What to do about trust

Moving on to trust in news, Guru-Murthy said: “If you look at the trust scores I think what this is is a clarion call for high quality, in-depth, impartial broadcast news and what it tells you is that people don’t want shouty opinions.” He referred to the higher trust scores impartial UK broadcasters such as Channel 4 news, ITV news and the BBC receive in comparison to the average trust in news in the country. He also compared that with much lower trust in news in the US, where broadcasts are widely populated by opinion-based news shows.

According to Ros Atkins, it’s up to journalists and media organisations to work to win the trust of their audience. “My main approach to the work we’re doing at the BBC at the moment is to not assume anyone is going to watch and not assume that anyone’s going to trust me,” he said. “I place evidence alongside every assertion that I make.” He added, “I don’t approach it in terms of ‘I’m a news guy making some news for you’. I am trying to make something that’s helpful.” And if the time is not right and the news product wouldn’t be as helpful, Atkins says journalists shouldn’t make it. “The willingness to not make something is one of the most powerful things we’ve been experimenting on,” he said.

The key to having both trust and engagement in your journalism is useful information, Alessandra Galloni said. “I think COVID-19 taught us that when it comes to news that is important for your life, then it becomes news that you need, not just news that you want.”

Looking at the business side of the report, Galloni stressed something that audiences often forget: “It costs money to deliver quality news. It costs money to keep journalists in Ukraine and to keep them safe.”

As the news industry adopts reader revenue models, panellists discussed the implications these models may have for society as a whole. Speaking about the working class audience of tabloids such as the Mirror, Phillips said: “If the trend continues towards subscription news, what happens to those people who can’t afford it or for whom it’s not quite as much of a priority?”

The report found that 65% have at least one subscription to a TV service like Netflix in the UK, 37% have a music subscription, 22% pay for a sports service, and only 7% have a news subscription. Before these online entertainment services emerged, Phillips pointed out, tabloid readers would primarily get sports and entertainment news from their daily paper.

Another concern with this business model is whether it has a future with the younger generations. Noting young people’s preferences for free news websites, Guru-Murthy said, “I do worry that some news brands that are now demanding subscriptions are gambling that young people are one day going to want to pay for it, and we have no idea whether they will or not.”

Reflecting on the report’s data, Atkins said, “I don’t think we should feel defeated by this data, I think it’s a challenge for journalists.” He emphasised going back to basics and questioning the rules of journalism formats that many take for granted, as well as the value of experimentation.

On the topic of impartiality, on which the BBC has strict rules that prevent its journalists from publicly expressing their opinion on matters of public policy, politics, or ‘controversial subjects’, Atkins said it didn’t feel like a constraint to him but “like a strength, a point of difference.” Especially in the digital arena, with its prevalence of opinion, he said that not taking a side made his journalism stand out. For the Mirror, the situation is different, being a part of British heritage print newspapers which typically do take a political standpoint, in its case left of centre. Being a reader of a particular British paper is traditionally a lifestyle choice and a part of people’s identity, Phillips said, giving them a sense of belonging like a club.

The onus is on journalists to convince people that their work is worth people’s time, attention, and in some cases money, our panellists emphasised. “A lot of people don’t see the value in what we’re doing. A lot of people don’t even understand what we’re doing,” Atkins said. When he begins making a journalism product, he starts by acknowledging he’s going to have to demonstrate its value, and that it’s made with processes that make the information trustworthy. “Journalists can’t assume that the value of their work is understood, but the hope has to be that if we do [this work] and people do get to the end, they feel the value.”