Many reporters are struggling to cope with the emotional demands of covering the pandemic, write Meera Selva and Anthony Feinstein 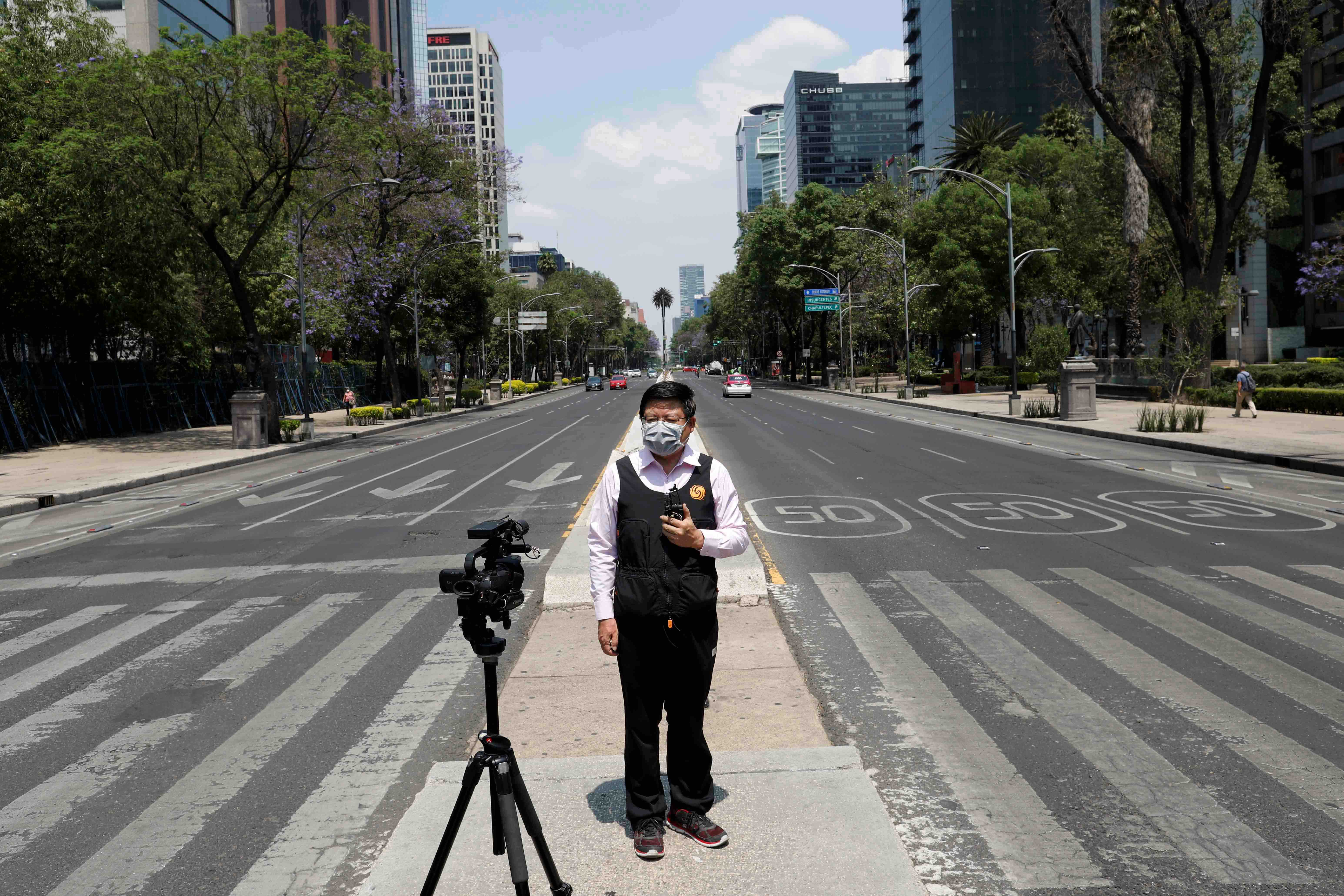 A journalist talks to the camera on Paseo de la Reforma in Mexico City in April 2020. REUTERS/Carlos Jasso

A significant number of journalists reporting on COVID-19 show signs of anxiety and depression, according to the early results of a survey into the current state of journalists’ emotional wellbeing.

Even experienced reporters working for large, well-funded media organizations are often struggling to cope with the demands on reporting on the pandemic.

A survey by the Reuters Institute for the Study of Journalism and the University of Toronto asked reporters a range of questions about their work, mental health and concerns in June 2020, during a period where all countries were affected by COVID-19 in some way.

The study is led by the two of us, Dr. Anthony Feinstein, Professor of Psychiatry at the University of Toronto and a neuropsychiatrist, and Meera Selva, Director of the Journalist Fellowship Programme at Reuters Institute for the Study of Journalism, working with a team of researchers. It builds on work Dr. Feinstein has done on how journalists are affected when they report on extreme events, including the 9/11 terror attacks, the Iraq war, organized crime in Mexico, the al-Shabaab attack on the Westgate Mall in Kenya, and. in a previous collaboration with the Reuters Institute, the refugee crisis in Europe.

We have surveyed a sample of 73 journalists from international news organisations, who in June 2020 were asked to answer a set of questions on their working conditions and emotional state. All journalists have worked on stories directly related to the pandemic. The survey had a 63 percent response rate.

The majority of our respondents, around 70 percent, suffer from some levels of psychological distress and responses suggest that 26 percent have clinically significant anxiety compatible with the diagnosis of Generalized Anxiety Disorder which includes symptoms of worry, feeling on edge, insomnia, poor concentration and fatigue.

Around 11 percent of respondents report prominent symptoms of post-traumatic stress disorder, which include recurrent intrusive thoughts and memories of a traumatic COVID-19-related event, a desire to avoid recollections of the event, and feelings of guilt, fear, anger, horror and shame.

These are preliminary results from a work in progress, and the reasons for this distress, and possible solutions, will be discussed in further analysis and subsequent publications. But the top-line findings are so striking that we feel it is important to flag up the pressure many journalists are working under so that news media and others can consider how to respond to the problems we identify.

This is a sample of experienced reporters, working at large, established news media, with an average of 18 years of experience, and virtually all – 99 percent – consider themselves to be in good physical health, but they are still hit hard by the circumstances. The situation could well be even worse in less privileged parts of the journalistic profession.

One striking aspect of reporting on the pandemic is that the story has been so widespread and constant that all reporters have had to learn fast how to cover the health beat.

Only 4 percent of our respondents were specialist health reporters to begin with, but now 74 percent say they are reporting on health-related matters linked to the pandemic. And in many countries journalists say they fear they are unable to do their job properly, in the absence of reliable information. One respondent wrote: “I am more stressed out because I am unable to cover the outbreak in my country as other countries in the west have done. I feel like a hypocrite because I am only allowed to follow what the government tells me to and I am not able to shed light on how the rest of the country is handling this outbreak.”

In one response a journalist spoke of how it was hard “navigating the challenge of covering a global story that is both personal but professional, leading a team to do so, having to explain a new subject in an accurate, responsible and fast way.” Another spoke of the stress of “covering for colleagues who could not make it to the office because of coronavirus fears.”

Others spoke of the difficulty of reporting on a story at a moment when trust in the media is falling: “Finding things to document that inform the public are extremely difficult with mistrust of the media at an all-time high. Gatherings can turn hostile on us in an instant and the idea that the media has any agenda other than simply documenting this time in our collective history is pervasive.”

Working patterns have also changed. Sixty percent report working longer hours since the pandemic and 60 percent noted more demand for stories because of the pandemic.

This combined tension of covering a new, complex beat with high and often personal stakes combined with a dramatic change in working patterns may well have contributed directly to the high levels of mental distress and anxiety.

The reporters who responded to the survey are from a section of society whose responsibilities have risen sharply during lockdown personally as well as professionally. The average age is 41 years. Just over half of them – 55 percent – have children and 58 percent of the sample are women.

One respondent spoke of how “the combination of working from home and home schooling, while trying to run a home, is impossible.”

Of course early research on the impact on COVID-19 on general public health indicates that the wider population is also suffering from higher rates of mental distress than normal.

Direct comparisons can be tricky given demographic mismatch but journalists still appear to be under higher than average strain.

This short article aims to highlight the pressures journalists are operating under but it also does recognise that the newsrooms studied here do have both the ability and willingness to support their staff.

An intriguing finding is that there is a negative correlation between covering the COVID-19 pandemic and age. Thus, the older you are, the less likely you were to be given a COVID-19 story. This may well reflect a concern on the part of news organizations that older people are more vulnerable to the effects of the infection and as such, younger journalists were more likely to be given COVID related stories. If this is indeed the case, and it is hard to interpret the data any other way, it does reflect sensitivity on the part of news organizations to the wellbeing of their staff.

Fifty-two percent of respondents have been offered access to some form of counselling since the outbreak of the pandemic and the survey shows that those who have received therapy since the start of the pandemic are less likely to be anxious, distressed or display symptoms of PTSD.

Preliminary analysis suggests that psychological distress correlates significantly with the absence of counselling, so those journalists who did not receive counselling since the start of the pandemic are more distressed.

This study polled journalists who are employed by established media houses, and the authors recognise there are many journalists working as freelancers, or for much smaller, poorly resourced newsrooms which are not in a position to offer any sort of extra support for their staff,

There is a strong case to be made for making sure all journalists can access support of some sort, either through their newsrooms or through external organizations such as the DART Center in New York and its counterparts elsewhere.

We are reporting these top-line findings here to draw attention to the issue, illustrate the pressures that many individual journalists clearly feel they are under (but may not feel like discussing if they are unsure about how widespread these problems are in the profession), and in the hope that journalists and news media will take these problems seriously, something we hope our past, and ongoing, research will help with.

As journalists continue to report on a fast moving story to a bewildered and mistrustful public, this support is vital. Reporters can only continue to provide accurate information about the crisis if they are able to and supported to cope with the demands the pandemic impose on them. News
How to get your COVID-19 coverage right: tips from a leading health news organisation