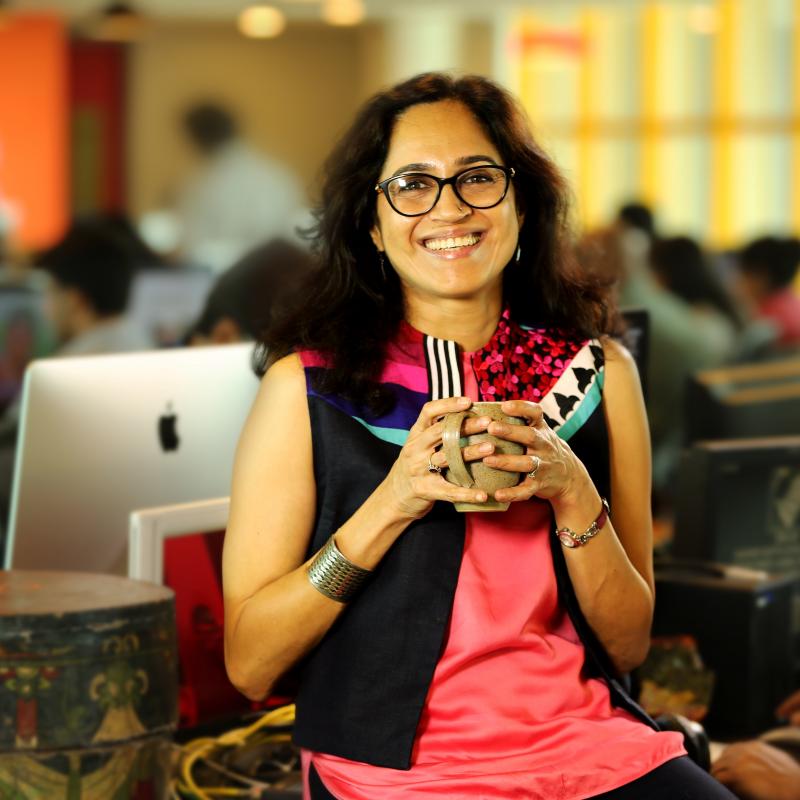 Ritu Kapur is a member of the RISJ's Advisory Board.

Ritu pioneered Citizen Journalism on Indian Television in 2008 when she launched The CJ show on CNN IBN (an English news channel). The platform aimed to democratise news on television, enabling every Indian to contribute and raise issues, using the mobile phone as the news gathering tool.

The show widened its reach, moving to the Hindi and regional channels and by going online with the CJ website (ibncj.com). Several stories by Citizen Journalists led to an impact, in the form of suspension of doctors responsible for medical negligence or getting civic authorities to repair flyovers or getting the system to provide redressal in a case of burning for dowry.

An activist of sorts in her college days (St. Stephen’s College) Ritu’s interest in media for social change was whetted when she did her masters in Film and TV production at the Mass Communication Research Center (MCRC) at Jamia University in New Delhi.

Having understood that mainstream media is the strongest tool for communication, Ritu joined Network 18 as a founder member in 1992. She started with producing THE INDIA SHOW, the country’s first local production on a satellite channel, Star plus.

In 1995 Ritu moved to drama on television with a real life docu-drama series, BHANWAR. Recreating  landmark cases in Indian legal history, the series won the Jury's Choice for the Best Investigative series at the Videocon-Screen Awards. Ritu was both director and screenplay writer on the series that ran on Sony Entertainment Channel.

When Network 18 launched an English News Channel (CNN IBN) Ritu took over as its Features Editor. Along with creating award winning entertainment, lifestyle, tech and health content she worked on a slew of special projects like REAL HEROES (realheroes.com). As part of this initiative, 24 ordinary Indians doing extraordinary work were recognised every year. Each Real Hero was given financial support to further the good work in the areas of education, rural development, health, disability, women’s issues and environment. Real Heroes went on to become a flagship campaign for Network 18.

This was also the phase when Ritu nurtured The Citizen Journalist Show. Other projects developed by her include the Senior Citizens’ Awards that celebrates the spirit of the elderly working for communities and Veer, a campaign to create employment for the specially abled.

During India’s 2014 general elections Ritu launched several campaigns. The Register To Vote campaign  that aimed to educate, empower and enable Indians on their rights as voters, leading to over 75,000 registrations online. The Power of 49, that put together a manifesto for women, such that political parties recognize this 49% of the Indian electorate as a critical vote bank. Ritu was also the Principal Television Advisor on Change India, an initiative headed by Raghav Bahl to draft a policy agenda for the new Prime Minister.

In 2011, Ritu launched History TV18 (a joint venture with A+E Networks) as the Head of Programming, while continuing her work as the Features Editor on CNN IBN. The channel became the leading factual channel within months of the launch, and continues to have the largest time spent in the genre. Dubbed in four regional languages, shows like Pawn Stars became huge hits on HistoryTV18, building a viewership of about 55 million households.  While with History TV 18, Ritu produced The Greatest Indian (a BBC format) that generated a countrywide online poll with more than 20 million votes. She also created a definitive series on the History of Bollywood cinema – Bollywood@100.

Married to Raghav Bahl, Ritu has now moved on from Network 18, where she was the Founder and controlling shareholder. She has now co-founded Quintillion Media Pvt Ltd. The company’s first offering is The Quint – a mobile first digital news Platform.