From Lagos to Dublin, this platform connects journalists to cover how climate change threatens cities around the world 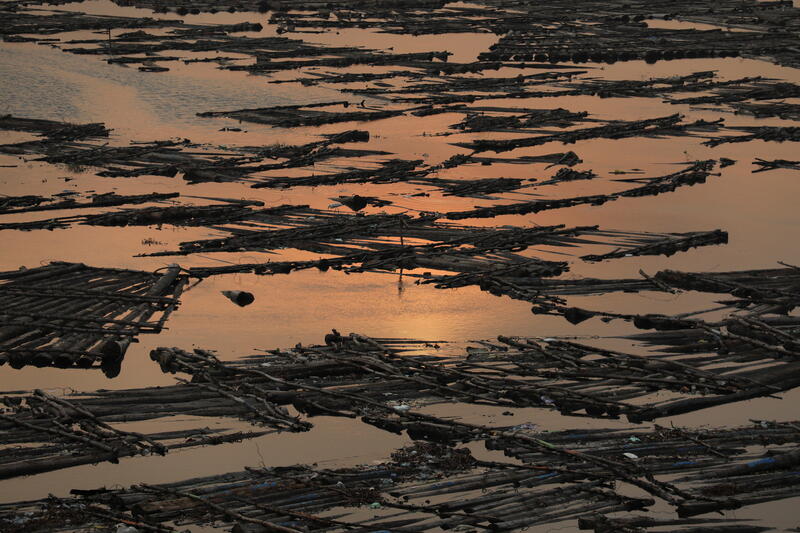 Logs of wood float on the Lagos lagoon near the Makoko riverine slum, in Lagos, Nigeria. REUTERS/Temilade Adelaja

In August 2018, I worked on a collaborative solutions-based story on Female Genital Mutilation [FGM] in Kenya, Senegal and Nigeria along with my colleagues Annie Njanja and Mamadou Lamine Ba. A few weeks earlier, Hostwriter, a global cross-border media organisation, awarded our team with the Hostwriter Pitch Prize, a €1000 grant given to a team of journalists with a story idea.

The grant helped us set up reporting trips to tell an important African story around the health challenges facing women and girls across the continent. Despite the ban on FGM by some African countries, these practices still go on in remote communities. Our story was published in February 2019 and was awarded the Hostwriter Story Prize a few months later.

Berlin-based Hostwriter has been helping journalists from around the world collaborate for story projects like this since 2013. The organisation provides resources and opportunities for networking and sharing ideas with colleagues.It also helps journalists raise the quality of stories produced.

“Collaboration helps to strengthen storytelling and this is not just between newsrooms but more importantly among journalists,” said Mercy Abang, Hostwriter’s CEO. “For example, freelancers often work in isolation but working with others helps them put together all the missing links and tell a compelling story.”

With funding from the Robert Bosch Foundation, the European Cultural Foundation, the Otto Sprenger Foundation and Next Media Hamburg, Hostwriter executes its collaborative projects and connects journalists around the world. But winning the Google Impact Challenge in 2018 set the stage for the nonprofit to expand and develop globally.

“For a couple of years, Hostwriter was a network connecting journalists who want to travel to other countries and meet other journalists either to collaborate on a story together or to get some form of assistance,” said Christina Lee, head of publications at the platform. “If you are travelling to a foreign country and you have never been there before, you will meet people from the network who will show you around and provide help where necessary.”

Membership of Hostwriter is free. Journalists register on the website with a story sample and wait for approval. Once approved, the journalist can explore resources, tips and opportunities for collaboration with colleagues through Hostwire, a crowdsourcing tool. Hostwire has an interactive chatroom where journalists can interact with each other and share ideas on similar projects.

“It’s still a very popular place for people to find people to work on projects with, jobs and other opportunities,” Lee said. “It's an open network. Journalists can meet colleagues, work on grants or attend conferences together. It's always gratifying to see that it continues to bring opportunities for people.”

Abang said the network helps journalists forge partnerships which will help them in their careers. “It is a community for journalists to do their jobs and share the same space when they travel for story projects.”

Journalism from the Global South

In 2021 Hostwriter launched Unbias the News, a remote cross-border newsroom run by female journalists. The aim was to create an outlet that would reflect their mission of creating a safe space for journalists who experience structural barriers in the field.  Before the launch, Hostwriter conducted a survey among journalists in the network. The findings gave them insights to shape the project.

Unbias the News brings together an international team of editors who work with journalists and support them in covering underreported stories from around the world. Most journalists from the Global South lack the opportunity to publish with big legacy outlets due to structural discrimination. Hostwriter wants to change this.

“We found that what journalists were lacking were paid publication opportunities, particularly journalists from the Global South,” said Lee, who is the news site’s editor-in-chief. “We felt really frustrated by that situation because we saw the challenges that hard-working journalists face.”

It’s much easier for journalists published by big media outlets to be accepted by international publications, Lee said: “If you haven’t, they won’t publish you, no matter how good your story is.”

In 2021 Unbias the News called for pitches from journalists from the Global South for its maiden edition. The aim was to close these gaps and give unrepresented journalists the opportunity to get published. More than 800 journalists from 80 countries applied. The pitches’ topics included climate change, migration, and women’s rights.

“We picked the ones that scored the highest after our five editors rated them,” she said. “We tried to judge articles by looking at what is the story idea and what is the quality of work we expect. We have seen really good results.”

Mahdi Garba and his colleague, Modupe Abidakun were some of the journalists commissioned by the newsroom. The duo did a story on how COVID-19 vaccine hesitancy in northern Nigeria had been fuelled by a legacy of mistrust in big Pharma companies. More than 10 children died and many more left with deformities in the region after a failed drug trial by Pfizer in 1996.

“Collaboration made it easy,” said Garba, who joined Hostwriter in 2019 with the aim of collaborating with other journalists and producing stories focused on solutions. Before their pitch was accepted, Garba had never met Abidakun. He told me they had a good working relationship. They shared ideas and worked with their editors on how to make the story better. “Collaboration is the backbone of journalism,” he said.

The newsroom also provides training for journalists. In November 2021, for example, Purple Romero, a consulting editor at the newsroom, organised a workshop on fact-checking and fighting disinformation.

“Our hope is to publish more stories that for whatever reason have challenges in finding a home because of various structural challenges,” Lee said.  The newsroom has built an alliance with other publications to co-publish stories produced by commissioned journalists. “Starting a new publication is a challenge. So we knew we needed to do something different. We wanted newsrooms to collaborate,” she said.

Garba’s story was co-published by four local media outlets in the country and also got translated and republished in German through Hostwriter’s partnership and contacts. “Independent media need to stick together. The only way to make an impact is to get more visibility and the best way to do that is to share the contents that they produce with multiple outlets, especially if you want to be global and reach people in other countries,” she said.

In September 2022, Unbias the News will launch a new project called Sinking Cities. Its goal is to investigate how rising sea levels and coastal flooding caused by climate change are threatening cities. From Lagos in Nigeria to Karachi in Pakistan, Alexandria in Egypt, and Dublin in Ireland, local journalists would be commissioned to write stories about these issues.

This is a story that must be told by local reporters in each of these countries, Lee says. They are the ones who can ask the key questions to the authorities, especially officials in charge of urban planning.

Selected journalists will be trained by the newsroom, connect and collaborate with their colleagues in other countries under the coverage of the project. The outcome of their research will be published by the newsroom and by other partner publications around the world.

Lee hopes journalists will share notes and information with each other during the reporting process so that the stories can get better. “It's a public interest matter. Our hope is that they can create multiple articles out of the same project,” she said. “[Building companies] are building in places that are meant to be under water. How are they getting a permit for that? Who approved it?”

Abang, who is also an editor with the newsroom, said some of these communities are on the verge of being submerged due to coastal flooding.

“That is why we want this project to adopt cross-border perspectives: so that you can link what is done in Lagos to what is being done in Karachi or Alexandria,” she said. “We want these journalists to work together. They are uniquely positioned to identify the actors who are expected to act as a result of climate change and to connect the dots with what is happening in other places.”

However, before the project launches in Spring, Abang and Lee tell me they want to train more journalists with additional support from funders. In 2018, The Google Impact Challenge helped the organisation publish a book on diversity and expand its programmes including a sponsored summit for members of the network.

“We have an equal pay plan for writers who contribute to the platform,” Abang said. “You don't set up a platform that gets traction in less than a year. That shows the quality of what we are doing and the stories produced.”

She said Hostwriter’s future plans are to launch more projects and train more journalists: “But we cannot do these without resources. That is why we need more funding to be able to continue serving these journalists and work with more partner newsrooms around the world.”