This report identifies five things everybody needs to know about the future of journalism from research done at the Reuters Institute.

These five trends will impact the work of professional reporters as well as everybody who works with them and relies on them, from the general public to politicians, NGOs, and private enterprise. Understanding the Promise and Limits of Automated Fact-Checking 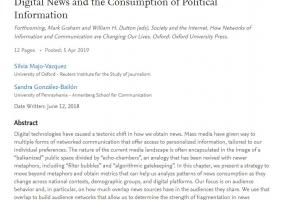