These are the Reuters Institute's Journalists Fellows for 2020 Hilary Term 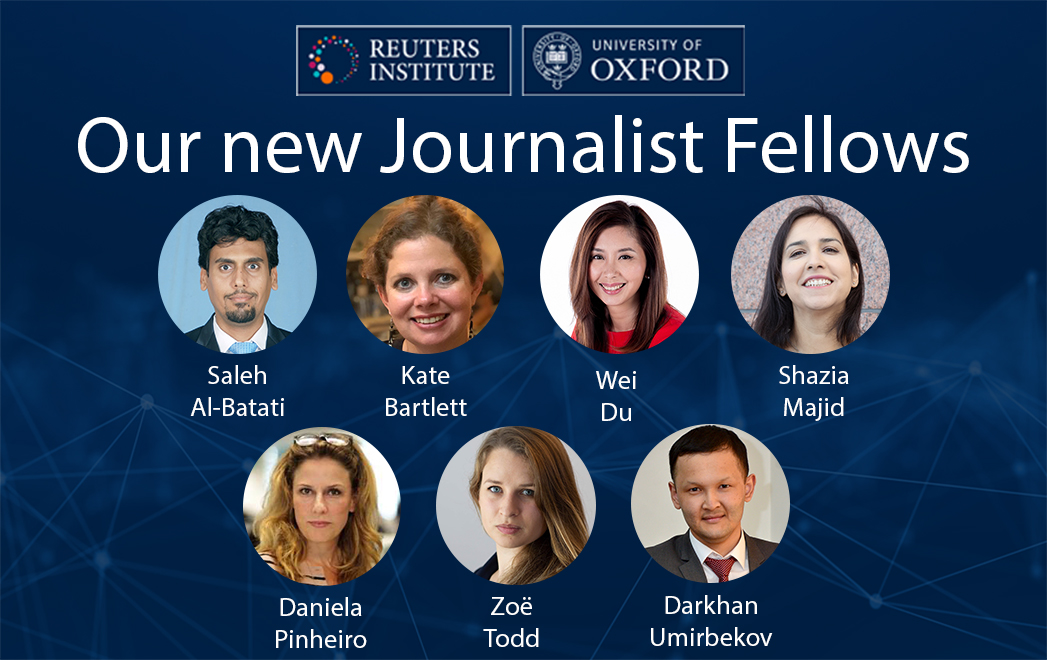 Seven journalists from five continents are joining the Fellowship programme at the Reuters Institute. Over the next one or two terms they will spend time away from their newsrooms and work on a project that will be of direct impact to them, their newsroom and the wider media industry. They will join those on the programme who continue their fellowship from last term. Here are our new Journalist Fellows with their bios and samples of their work.

Saleh al-Batati is a Yemeni freelance journalist and a 2019 News and Documentary Emmy Award winner. He broke into journalism in 2012 reporting from South Yemen for the country's first English-language newspaper, the Yemen Times. Since 2015, he has been working as a stringer from Yemen for the Wall Street Journal and has contributed to Al Jazeera English. In addition, al-Batati worked as a fixer and a local producer for international news organizations including the BBC and VICE News covering the war in Yemen.

Project topic: How Al-Jazeera Arabic and BBC Arabic reported the civilian casualties of the war in Yemen before and within Saudi-Qatar crisis?

Kate Bartlett is the Southern and East Africa correspondent for Deutsche Presse-Agentur, based in Johannesburg. She has reported from Congo, Zimbabwe, and South Africa, as well as Afghanistan and Bosnia. Before joining DPA she worked in Cambodia and Hong Kong.

Project topic: Populism, fake news, and the South African journalists who brought down a president.

Wei Du is an international correspondent for CNA. Based in Hong Kong, she travels within the region to cover major news events and produce feature stories. Her recent assignments include the anti-government protests in Hong Kong and nuclear threat and disarmament talks on the Korean Peninsula. In 2019, she also produced a documentary series examining China's global influence through food. Before her current assignment, she was a business presenter. Wei has a Master of Science degree from the Columbia University Graduate School of Journalism. She previously worked for Bloomberg TV in Hong Kong and CNBC in the US.

Shazia Majid is a senior investigative reporter at VG, Norway’s largest daily newspaper. She has worked extensively within business journalism and data-driven journalism and is a double awardee of the SKUP-diploma for excellence in investigative journalism. In 2019 she published her first non-fiction book, “Ut av skyggene” (Stepping out of the shadows), which is the first to tell the comprehensive story of the first non-white immigrant women in Norway and was short-listed for the country’s most prestigious literary prize, Brageprisen, for best non-fiction. She has degrees in business administration and journalism.

Project topic: Who is the ethnic minority woman in the news?

Daniela Pinheiro is the first female journalist appointed as editor-in-chief for a weekly magazine in Brazil. A former Knight (JSK) Fellow in Journalism at Stanford University, she ran Epoca Magazine from February 2018 until September 2019, when she resigned along with three editors and four columnists after attacks from Bolsonaro's family.  She is a four times winner of Brazil's Women in Press prize, and three times was awarded Brazilian journalism's most distinguished prize, the Comunique- se, as best print journalist in Brazil. Fluent in five languages, she is a frequent speaker at conferences about Journalism and Politics around the world.

Project topic: The silent majority and the blindness of the media. Trump, Brexit, Bolsonaro: why did they win and why did the media miss it?

Zoë Todd is a multimedia journalist from Canada, where she filed feature and news stories on web, radio and television for the Canadian Broadcasting Corporation (CBC). She holds a bachelor's degree from the Carleton University School of Journalism and a master's degree from the Columbia University Graduate School of Journalism. Her coursework at both universities focused heavily on politics and international relations. Todd is now based in the United States as a digital reporter and the 2019 Abrams Journalism Fellow for award- winning PBS documentary series FRONTLINE.

Project topic: How Canada's national broadcaster is stretching its dollar into under-reported regions.

Darkhan Umirbekov is a freelance journalist from Kazakhstan. He holds bachelor's and master's degrees in political science from Al Farabi Kazakh National University and a master's in journalism from Columbia University.

Our incoming Journalist Fellows will join nine colleagues who are continuing their fellowship from last term. Here are their names and roles: