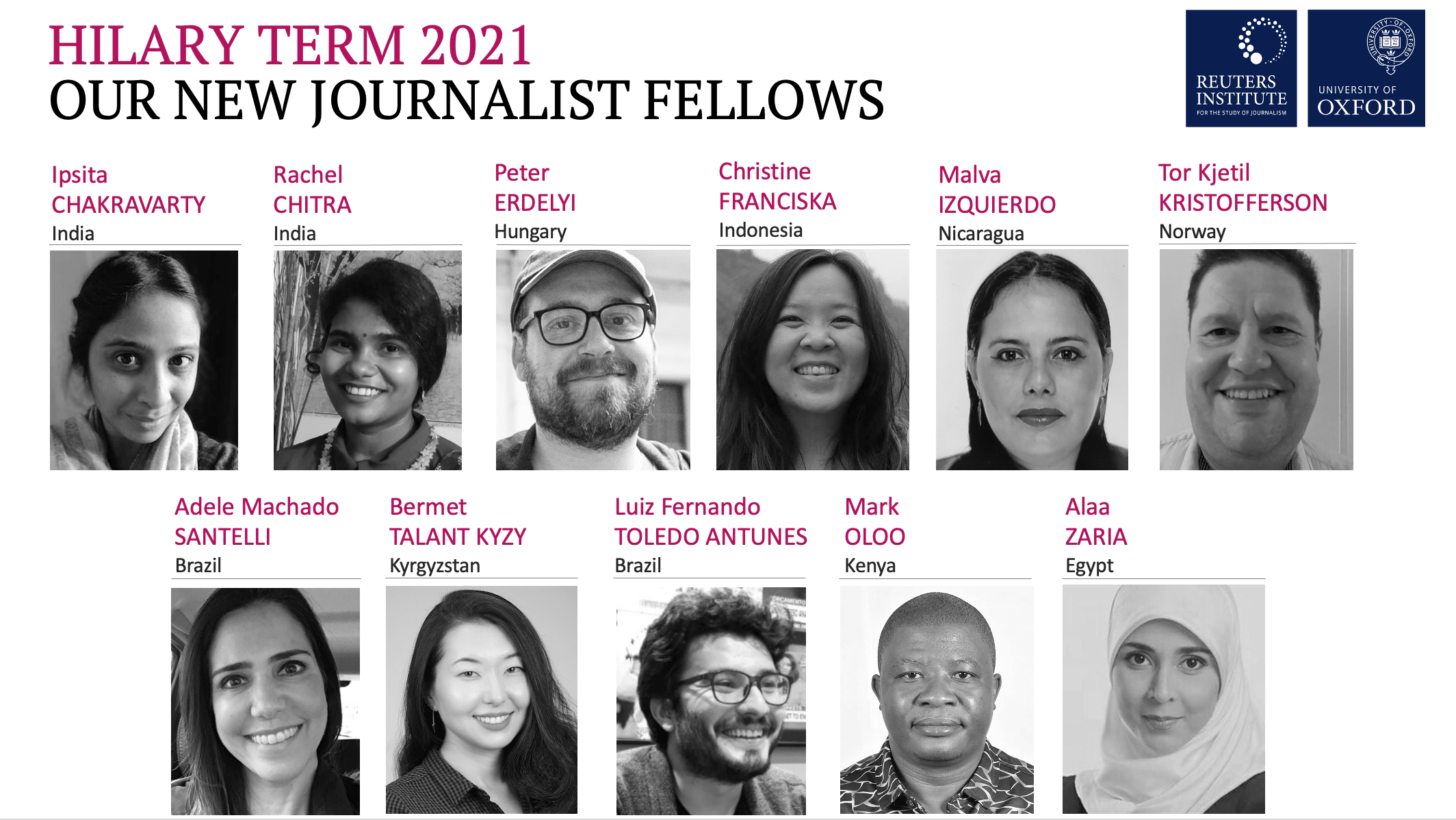 Eleven new Journalist Fellows are joining the Reuters Institute this term. They will spend six months exploring some of the key issues and challenges facing their roles and their wider profession. They join two Journalist Fellows, Ramisha Ali and Jenni Kangasniemi, who are continuing their fellowship from last term. You can find each of them below with links to their work.

If you are interested in becoming a Journalist Fellow, beginning in October this year or January 2022, applications are open until 8 February 2021. Here you can check everything you need to know to apply.

Kolkata-based journalist Ipsita Chakravarty worked for the Times of India, the Telegraph and the Indian Express before taking up her current role at Scroll.in, where she supervises coverage of Jammu, Kashmir and North East states.

She is interested in stories that do not just focus on issues of security but instead on the lives and politics of the people who live in conﬂict-torn areas.

Her work has been recognised with a 2017 Red Ink Award for Human Rights for coverage of Kashmir, and a Ramnath Goenka Award for excellence in editing in 2014.

Rachel is a ﬁnance journalist and special correspondent for the Times of India with a passion for using data to tell human stories. She has previously worked for Reuters, New Indian Express, and Deccan Chronicle, and specialises in covering banking, insurance and the capital markets.

In 2020, when the government declined to release information, she gathered publicly available data – and shared it with colleagues at other outlets – revealing the PM Cares Fund had distributed more than $1.4bn.

Project topic: The documentation of lynching and rape of Muslims and Dalits in India

Peter is currently director of business development at one of Hungary's last independent media outlets, 444.hu.

Before this, Peter was an investigative reporter covering stories related to national security, covert foreign inﬂuence, corruption, hate groups and the rule of law, with a speciﬁc focus on judicial independence.

Christine started her journalism career as a newspaper journalist in Jakarta before joining the BBC World Service as a multimedia producer in 2013, where she wrote social media stories, and produced video and radio packages.

In 2018, she earned a Master's degree in digital media and culture from the University of Warwick under the Chevening Scholarship programme.

She now works as managing editor at lock-screen content platform, Glance, in Indonesia.

She won a Visual Changemaker Award from Project L (2015), and the Media Innovation (2016) and Best Journalistic Piece (2018) awards in the Conchita Palacios National Awards.

Project topic: How to cover emergencies in Nicaragua

Tor began his career in journalism at a local radio station 26 years ago. Today, he is a news editor at Finnmark Dagblad, a Norwegian daily newspaper published in Hammerfest, Norway.

Tor’s mother was from the indigenous Finno-Ugric people of Northern Norway, the Sami. As a result of a government assimilation programme, he was never taught his mother tongue. Nevertheless, today Tor proudly represents his heritage in his coverage.

Adele is an environmental journalist with a postgraduate degree in Environmental, Sustainability and Global Policies from Fundação Armando Álvares Penteado (FAAP) in São Paulo. She is currently researching ocean plastic pollution as part of a master's degree program in Environmental Sciences at University of São Paulo.

She has worked in some of Brazil’s biggest news rooms for the past 13 years, including BAND, BandNews TV and Rede Record. She currently works at TV Cultura, and is a freelance reporter for National Geographic Brasil.

Bermet Talant is a Kyrgyz journalist whose work focuses on politics and human rights. From 2016 to 2020, she worked for the Kyiv Post, Ukraine’s major English-language publication, covering some of the biggest international stories such as the rise of television comedian Volodymyr Zelensky to power, the U.S. impeachment scandal, and Ukraine’s peace process with Russia.

In 2017, Bermet completed a three-month fellowship with the Organized Crime and Corruption Reporting Project (OCCRP). During her stint there she contributed to several investigative projects and co-authored an investigation into the murder of the exiled Tajik opposition leader in Istanbul.

Bermet has also contributed stories on Turkey, Belarus, and Kyrgyzstan to such media outlets as Eurasianet, Open Democracy, Calvert Journal, and RFE/RL.

Luiz is a director of the Brazilian Association of Investigative Journalism (Abraji) and has spent a decade using public documents, data mining, and investigative journalism techniques to hold public ofﬁcers to account.

He is a Sigma Awards ﬁnalist (a data journalism prize created by European Journalism Centre), and also has Prêmio Estado, Allianz, República and Claudio Weber Abramo awards to his name.

Mark is a production editor and senior writer at Kenya's oldest daily, The Standard.

Prior to this, he worked for Nation Media Group, Capital FM Group, Kenya Times and Kenya News Agency. He also worked at the Tallahassee Democrat newspaper in the U.S. as part of the American Society of Newspaper Editors mentoring programme. In 2017, he was named a World Press Institute fellow. He is an alumnus of the International Institute of Journalism in Germany, Radio Nederland Training Centre and Fojo Media Institute in Sweden.

Alaa is an Egyptian TV and radio presenter who has worked for a number of Arabic satellite TV channels. She has also worked as a journalist for various websites including Al Jazeera and Anadolu agency. She has taken part in training with Al Jazeera, the Foreign Policy Journal and Women's Nobel Initiative and has more than 15 years of experience in the field. She now offers training to others, including voice coaching, editing and presenting.

Project topic: Creating a platform for refugee journalists to share their stories